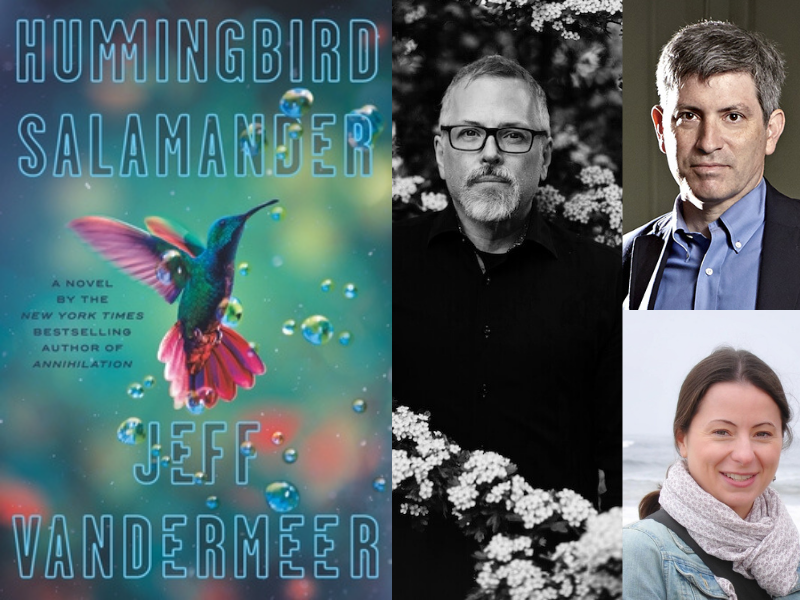 Registrations including a book will come with a personalized bookplate and access to an exclusive Hummingbird Salamander website.

From the author of Annihilation, a brilliant speculative thriller of dark conspiracy, endangered species, and the possible end of all things.

Security consultant “Jane Smith” receives an envelope with a key to a storage unit that holds a taxidermied hummingbird and clues leading her to a taxidermied salamander. Silvina, the dead woman who left the note, is a reputed ecoterrorist and the daughter of an Argentine industrialist. By taking the hummingbird from the storage unit, Jane sets in motion a series of events that quickly spin beyond her control.

Soon, Jane and her family are in danger, with few allies to help her make sense of the true scope of the peril. Is the only way to safety to follow in Silvina’s footsteps? Is it too late to stop? As she desperately seeks answers about why Silvina contacted her, time is running out—for her and possibly for the world.

Jeff VanderMeer is the author of Dead Astronauts, Borne, and The Southern Reach Trilogy, the first volume of which, Annihilation, won the Nebula Award and the Shirley Jackson Award and was adapted into a movie by Alex Garland. He speaks and writes frequently about issues relating to climate change as well as urban rewilding. He lives in Tallahassee, Florida, on the edge of a ravine, with his wife, Ann VanderMeer, and their cat, Neo.

Dr. Meghan Brown is a biology professor at Hobart and William Smith Colleges (Geneva, NY), where she studies and teaches about the critical role humans play in shaping our Earth home. Her non-fiction publications address questions such as: How does climate change impact organisms in mountain lakes? Did Cuba’s Revolution shape its modern ecology? What role do non-native species play in the conservation of vulnerable environments? She is a Fulbright fellow, a National Science Foundation grantee, and a recently featured scientist in National Geographic.

Moderator Carl Zimmer is the author of fourteen books about science. His latest book is Life’s Edge: The Search for What It Means to Be Alive. Zimmer’s column Matter appears each week in the New York Times. His most recent book, She Has Her Mother’s Laugh, was named a best science book of 2018 by The Guardian. Zimmer is a familiar voice on radio programs such as Radiolab and professor adjunct at Yale University.