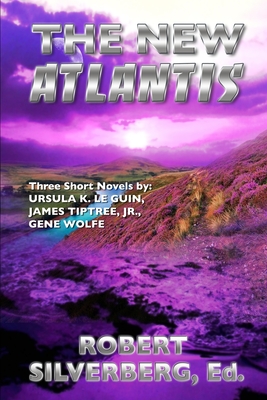 The New Atlantis, by Ursula K. Le Guin: In a dark near-future, global warming and a ruined ecology is causing the continents to sink into the oceans just as the towers of Atlantis re-emerge above the sea. Locus award winner and Hugo finalist.

Silhouette, by Gene Wolfe, and A Momentary Taste of Being, by James Tiptree, Jr., present two different masterpieces on a similar theme: A deep-space colony exploration ship approaches their target planet, where they must investigate whether or not it's hospitable enough to signal Earth to send more colonists. Things are not as they seem... Nebula / Locus award finalist stories.

Three of science fiction's most gifted writers-winners of Hugos, Nebulas, and a National Book Award-unleash their imaginations to present startling glimpses of humanity's future on Earth and in space. Blended into that future are age-old mysteries of the human psyche, mythicized fragments of the past, and the eternal question of biological purpose.

In "Silhouette" Gene Wolfe creates a self-contained world, an immense starship on a multi-generational mission to assure continuation of the race by colonizing the stars. It is a world, devised and constructed through man's technical genius, that comes to be threatened by the primitive superstitions and petty jealousies carried into space by the very technicians who serve in science's most ambitious project. The salvation of the mission and of the hundreds of lives bound to it comes to depend on a curious interplay of technology and occult human abilities.

Ursula Le Guin remains earthbound, but on a "brave, new world" where a bureaucratic tyranny proves less and less able to cope with supplying the needs of a burgeoning population. A subtle irony pervades her story, "The New Atlantis." Even as government strives to assure permanence of control, geologic upheavals awaken a haunting racial memory of antediluvian civilizations and grandeur long buried beneath the seas.

James Tiptree, Jr., confronts a disciplined space crew with humanity's first encounter with a wholly alien life form. Here again the survival of the human race depends on successful location of a new planet where mankind can establish its society with renewed vigor. But out of the questions of how to survive any threat that may be posed by an unknown life form arises a more central question: Is it intended that humanity survive?