If the Universe Is Teeming with Aliens ... Where Is Everybody?: Seventy-Five Solutions to the Fermi Paradox and the Problem of Extraterrestrial Life (Science and Fiction) 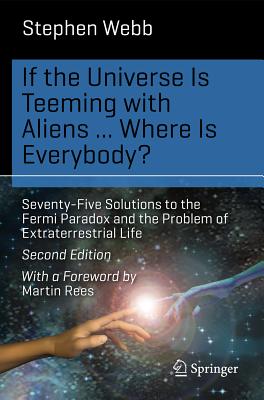 If the Universe Is Teeming with Aliens ... Where Is Everybody?: Seventy-Five Solutions to the Fermi Paradox and the Problem of Extraterrestrial Life (Science and Fiction)

Given the fact that there are perhaps 400 billion stars in our Galaxy alone, and perhaps 400 billion galaxies in the Universe, it stands to reason that somewhere out there, in the 14-billion-year-old cosmos, there is or once was a civilization at least as advanced as our own. The sheer enormity of the numbers almost demands that we accept the truth of this hypothesis. Why, then, have we encountered no evidence, no messages, no artifacts of these extraterrestrials?

In this second, significantly revised and expanded edition of his widely popular book, Webb discusses in detail the (for now ) 75 most cogent and intriguing solutions to Fermi's famous paradox: If the numbers strongly point to the existence of extraterrestrial civilizations, why have we found no evidence of them?

Reviews from the first edition:

"Amidst the plethora of books that treat the possibility of extraterrestrial intelligence, this one by Webb ... is outstanding. ... Each solution is presented in a very logical, interesting, thorough manner with accompanying explanations and notes that the intelligent layperson can understand. Webb digs into the issues ... by considering a very broad set of in-depth solutions that he addresses through an interesting and challenging mode of presentation that stretches the mind. ... An excellent book for anyone who has ever asked 'Are we alone?'." (W. E. Howard III, Choice, March, 2003)

"Fifty ideas are presented ... that reveal a clearly reasoned examination of what is known as 'The Fermi Paradox'. ... For anyone who enjoys a good detective story, or using their thinking faculties and stretching the imagination to the limits ... 'Where is everybody' will be enormously informative and entertaining. ... Read this book, and whatever your views are about life elsewhere in the Universe, your appreciation for how special life is here on Earth will be enhanced A worthy addition to any personal library." (Philip Bridle, BBC Radio, March, 2003)

Since gaining a BSc in physics from the University of Bristol and a PhD in theoretical physics from the University of Manchester, Stephen Webb has worked in a variety of universities in the UK. He is a regular contributor to the Yearbook of Astronomy series and has published an undergraduate textbook on distance determination in astronomy and cosmology as well as several popular science books. His interest in the Fermi paradox combines lifelong interests in both science and science fiction.

Physicist Stephen Webb is best known as author of popular science books: he has published 'Measuring the Universe - The Cosmological Distance Ladder' in 1999, the first edition of 'If the Universe Is Teeming with Aliens ... WHERE IS EVERYBODY? Fifty Solutions to the Fermi Paradox and the Problem of Extraterrestrial Life' in 2002, 'Out of this World - Colliding Universes, Branes, Strings, and Other Wild Ideas of Modern Physics' in 2004 and 'New Eyes on the Universe - Twelve Cosmic Mysteries and the Tools We Need to Solve Them' in 2012.