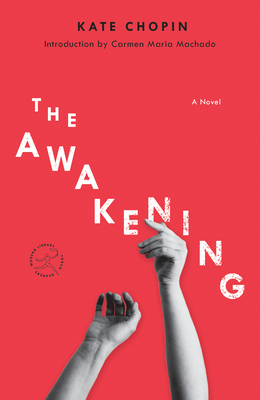 By  Kate Chopin , Introduction by  Carmen Maria Machado
Paperback
$ 8.00
Likely On Our Shelves

A new edition of Kate Chopin’s controversial masterpiece, an essential novel in the canon of early feminism—with an introduction by Carmen Maria Machado, award-winning author of Her Body and Other Parties.

“Whatever came, she had resolved never again to belong to another than herself.”

With its forthright treatment of sex and depression, The Awakening, first published in 1899, was so shocking to turn-of-the-century readers that it was neglected for decades. Rediscovered in the 1960s, this brief, beautiful novel is considered a landmark of early feminism. It is the story of Edna Pontellier, a twenty-eight-year-old wife and mother of two who—with devastating consequences—rejects her conventional married life for a transgressive path of self-discovery.

The Modern Library Torchbearers series features women who wrote on their own terms, with boldness, creativity, and a spirit of resistance.

Born and raised in St. Louis, Kate Chopin (1850–1904) married the son of a cotton grower and moved to Louisiana. A mother of six by the age of twenty-eight and a widow at thirty-two, she turned to writing to support her young family, publishing two novels and almost one hundred short stories.