The Cat Man of Aleppo 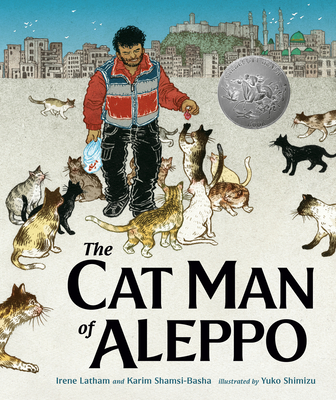 The Cat Man of Aleppo

By  Karim Shamsi-Basha , Irene Latham , Illustrated By  Yuko Shimizu
$ 17.99
Out of Stock In Store (Click to Order)

The Caldecott Honor-winning true story of Mohammad Alaa Aljaleel, who in the midst of the Syrian Civil War courageously offered safe haven to Aleppo's abandoned cats.


Aleppo's city center no longer echoes with the rich, exciting sounds of copper-pot pounding and traditional sword sharpening. His neighborhood is empty--except for the many cats left behind.

Alaa loves Aleppo, but when war comes his neighbors flee to safety, leaving their many pets behind. Alaa decides to stay--he can make a difference by driving an ambulance, carrying the sick and wounded to safety. One day he hears hungry cats calling out to him on his way home. They are lonely and scared, just like him. He feeds and pets them to let them know they are loved. The next day more cats come, and then even more! There are too many for Alaa to take care of on his own. Alaa has a big heart, but he will need help from others if he wants to keep all of his new friends safe.

Irene Latham is the author of hundreds of poems and nearly twenty current and forthcoming poetry, fiction, and picture books. Winner of the 2016 ILA Lee Bennett Hopkins Promising Poet Award, she lives on a lake in rural Alabama, where the queen of the house is a cat named Maggie.

Karim Shamsi-Basha immigrated to the United States from Damascus in 1984. While in Syria, he spent a year at the University of Aleppo and got to know the people of that ancient city. All of Karim's work embodies love as a universal truth. His desire for people to love one another is where his personal and professional goals intersect.

Yuko Shimizu has been drawing and painting ever since she can remember, and has loved animals just as long. Though she has been illustrating for magazines, newspapers, and books longer than you have lived, this is only her second picture book (Barbed Wire Baseball, 2013). Yuko lives and works with a rescued senior Chihuahua named Bear, who is probably smaller than the cats in Alaa's sanctuary.