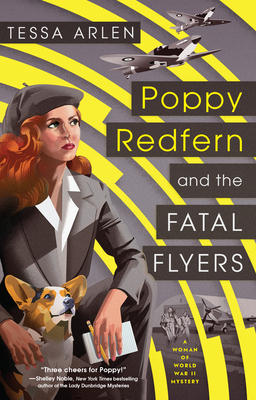 “You’ll love this character so much, you’ll want her as your best friend.”—Alyssa Maxwell, author of the Gilded Newport Mysteries and a Lady and Lady’s Maid Mysteries

Poppy Redfern is back on the case when two female fighter pilots take a fatal dive in an all-new Woman of World War II Mystery by Tessa Arlen.

It is the late autumn of 1942. Our indomitable heroine Poppy Redfern is thoroughly immersed in her new job as a scriptwriter at the London Crown Film Unit, which produces short films featuring British civilians who perform acts of valor and heroism in wartime. After weeks of typing copy and sharpening pencils, Poppy is thrilled to receive her first solo script project: a fifteen-minute film about the Air Transport Auxiliary, known as Attagirls, a group of female civilians who have been trained to pilot planes from factories to military airfields all over Britain.

Poppy could not be more excited to spend time with these amazing ladies, but she never expects to see one of the best pilots die in what is being labeled an accident. When another Attagirl meets a similar fate, Poppy and her American fighter-pilot boyfriend, Griff, believe foul play may be at work. They soon realize that a murderer with a desire for revenge is dead set on grounding the Attagirls for good. . . .

Tessa Arlen was born in Singapore, the daughter of a British diplomat; she has lived in Egypt, Germany, the Persian Gulf, China, and India. An Englishwoman married to an American, Tessa lives on the West Coast with her family and two corgis.