Mimi Lee Gets a Clue (A Sassy Cat Mystery #1) 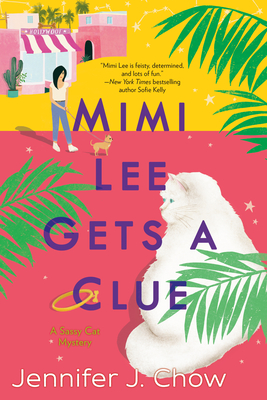 Mimi Lee Gets a Clue (A Sassy Cat Mystery #1)

Mimi Lee is in over her head. There's her new Los Angeles pet grooming shop to run, her matchmaking mother to thwart, her talking cat Marshmallow to tend to—oh, and the murder of a local breeder to solve...now if only Mimi hadn't landed herself on top of the suspect list.

Mimi Lee hoped to give Los Angeles animal lovers something to talk about with her pet grooming shop, Hollywoof. She never imagined that the first cat she said hello to would talk back or be quite so, well, catty—especially about those disastrous dates Mimi's mother keeps setting up.

When Marshmallow exposes local breeder Russ Nolan for mistreating Chihuahuas, Mimi steals some of her cat's attitude to tell Russ off. The next day the police show up at Hollywoof. Russ has been found dead, and Mimi's shouting match with him has secured her top billing as the main suspect.

Hoping to clear her name and save the pups Russ left behind, Mimi enlists help from her dreamy lawyer neighbor Josh. But even with Josh on board, it'll take Mimi and Marshmallow a lot of sleuthing and more than a little sass to get back to the pet-grooming life—and off the murder scene.

"This fast-paced, light and fun read features Malaysian-Chinese food, a fun loving family, lots of
animals and a solid mystery that will be a challenge to figure out – my kind of mystery!" -Esme Addison, author of A Spell for Trouble

She's involved in Crime Writers of Color, Mystery Writers of America, and Sisters in Crime. Visit her online at jenniferjchow.com.