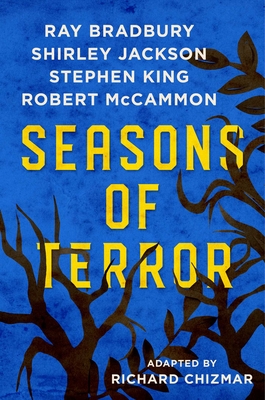 In the spring, a young girl hears a woman crying for help from beneath the dirt in her backyard, but no one seems to believe her…During summertime, a college student inexplicably walks deeper and deeper into the thick forest, until he happens upon a stone cottage whose inhabitants lead a very particular way of life…Before the fall chill arrives, a group of friends embark on an adventurous weekend to a remote lake where a sinister force awaits…In the dark depths of winter, behind frigid enemy lines, Great Britain’s most potent weapon against Nazi Germany lives between worlds: good and evil, and man and wolf….

With evocative prose and vivid illustrations, these unforgettable stories—“The Screaming Woman” by Ray Bradbury; “The Man in the Woods” by Shirley Jackson; “The Raft” by Stephen King; and “The Man from London” by Robert McCammon—embody the seasons in which they are set, bringing you to the very edge of reality, mixing the best elements of the mythology of our youth with the perilous horrors of adulthood.

Richard Chizmar is the coauthor (with Stephen King) of the New York Times bestselling novella, Gwendy’s Button Box. Recent books include The Girl on the Porch; The Long Way Home, his fourth short story collection; and Widow’s Point, a chilling tale about a haunted lighthouse written with his son, Billy Chizmar, which was recently made into a feature film. His short fiction has appeared in dozens of publications, including Ellery Queen’s Mystery Magazine and The Year’s 25 Finest Crime and Mystery Stories. He has won two World Fantasy awards, four International Horror Guild awards, and the HWA’s Board of Trustee’s award. Chizmar’s work has been translated into more than fifteen languages throughout the world, and he has appeared at numerous conferences as a writing instructor, guest speaker, panelist, and guest of honor. Follow him on Twitter @RichardChizmar or visit his website at: RichardChizmar.com.

Ray Bradbury (1920–2012) was the author of more than three dozen books, including Fahrenheit 451, The Martian Chronicles, The Illustrated Man, and Something Wicked This Way Comes, as well as hundreds of short stories. He wrote for the theater, cinema, and TV, including the screenplay for John Huston’s Moby Dick and the Emmy Award–winning teleplay The Halloween Tree, and adapted for television sixty-five of his stories for The Ray Bradbury Theater. He was the recipient of the 2000 National Book Foundation’s Medal for Distinguished Contribution to American Letters, the 2007 Pulitzer Prize Special Citation, and numerous other honors.

Stephen King is the author of more than sixty books, all of them worldwide bestsellers. His recent work includes If It Bleeds, The Institute, Elevation, The Outsider, Sleeping Beauties (cowritten with his son Owen King), and the Bill Hodges trilogy: End of Watch, Finders Keepers, and Mr. Mercedes (an Edgar Award winner for Best Novel and an AT&T Audience Network original television series). His novel 11/22/63 was named a top ten book of 2011 by The New York Times Book Review and won the Los Angeles Times Book Prize for Mystery/Thriller. His epic works The Dark Tower, It, Pet Sematary, and Doctor Sleep are the basis for major motion pictures, with It now the highest-grossing horror film of all time. He is the recipient of the 2020 Audio Publishers Association Lifetime Achievement Award, the 2018 PEN America Literary Service Award, the 2014 National Medal of Arts, and the 2003 National Book Foundation Medal for Distinguished Contribution to American Letters. He lives in Bangor, Maine, with his wife, novelist Tabitha King.

Robert McCammon is the New York Times bestselling author of Boy's Life and Gone South, among many critically acclaimed works of fiction, with millions of copies of his novels in print. He is a recipient of the Bram Stoker Lifetime Achievement Award, the Grand Master Award from the World Horror Convention, and is a World Fantasy Award winner. He lives in Alabama. Visit the author at RobertMcCammon.com.