Definitely Hispanic: Growing Up Latino and Celebrating What Unites Us 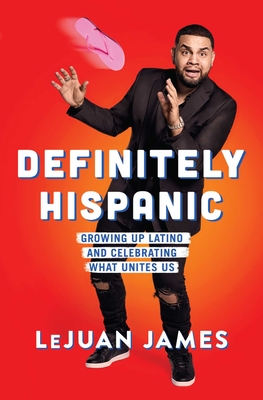 Definitely Hispanic: Growing Up Latino and Celebrating What Unites Us

By  LeJuan James
Paperback
$ 17
On Our Shelves Now

Perfect for fans of Jane the Virgin’s celebration of Latinidad and Fresh Off the Boat’s situational humor, Definitely Hispanic is a collection of introspective and witty essays by social media influencer and viral phenomenon LeJuan James about growing up Hispanic in the US.

Social media influencer and viral phenomenon LeJuan James loves being Hispanic. But growing up in the United States to immigrant parents, he quickly noticed that their house rules and traditions didn’t always match up with his friends’. Years later, the result was a lifetime of laugh-out-loud, relatable moments that he reenacted on camera and shared with the world online. Now, LeJuan is taking a closer look at everything he loves about his family, culture, and community.

Definitely Hispanic is a collection of heartfelt memoiristic essays that explores the themes LeJuan touches upon in his videos, and celebrates the values and traditions being kept alive by Hispanic parents raising US–born children. He shares anecdotes about discovering the differences between his and his friends’ households, demystifies “La Pela” (the Spanking), explains the vital role women play in Hispanic families, and pays reverence to universal cultural truths like “food is love” and “music is in Hispanics’ DNA.”

From the chapter “#Home”—in which LeJuan talks about how his family moved back and forth between the United States and Puerto Rico until settling in Orlando, Florida—to “#TheHouse”—in which he was finally able to buy his parents the home they deserve thanks to his online success—this wide-ranging collection celebrates being Latino and offers a humorous yet warm-hearted look at the lives of second-generation immigrants in the US. LeJuan’s hilarious online persona comes to life on every page.

LeJuan James is a bicultural and bilingual social media influencer, comedian, and content creator, sharing weekly videos about growing up Hispanic in the United States. He lives in Orlando, Florida with his fiancée, Camila, and their dogs, Yoda and Luke. This is his first book.