The Most Powerful Woman in the Room Is You: Command an Audience and Sell Your Way to Success 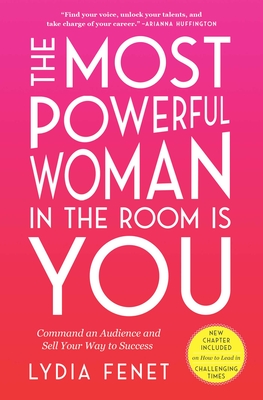 The Most Powerful Woman in the Room Is You: Command an Audience and Sell Your Way to Success

The Senior Vice President of Christie’s and seasoned auctioneer Lydia Fenet, with her “razor-sharp humor and her don’t-mess-with-me gavel strike” (Mariska Hargitay, star of Law & Order: Special Victims Unit), shares the secrets of success and the strategies behind her revolutionary sales approach to show you how to embrace and channel your own power in any room.

As a senior executive at Christie’s, leader in her field, and one of Gotham magazine’s Most Influential Women in New York, Lydia Fenet knows firsthand that the one skill that can set women apart in both their personal life and career is the ability to sell. The Most Powerful Woman in the Room Is You equips you with everything you need to know—from how to sell authentically and how to network (or die), to the importance of never apologizing (start negotiating instead), how to perfect your poker face, and always, always, tell the truth. Most of all, she offers plenty of encouragement to take ownership in your position and look for opportunities to innovate.

Filled with additional case studies, thoughtful insights, and meaningful advice from some of the most powerful and successful women in business, fashion, journalism, sports, and the arts, The Most Powerful Woman in the Room Is You “is an insightful, inspiring guide for women who are trying to claim their own seat at the table” (New York Journal of Books).

Lydia Fenet is Managing Director, Global Head of Strategic Partnerships at Christie’s, where she’s raised more than half a billion dollars for nonprofits globally. In her capacity as lead benefit auctioneer for the firm, she has led auctions for more than six hundred organizations and trains Christie’s charity auctioneers. Lydia travels around the country lecturing on “The Art of Selling” and speaking to groups about empowering women in the workplace. She was named one of New York’s most influential women by Gotham magazine and has been featured in The New York Times, The Wall Street Journal, Forbes, Crain’s, Elle, and has appeared in Vanity Fair, Women’s Wear Daily, Vogue, and Town & Country. She lives in New York City with her husband, Chris, and their three children, Beatrice, Henry, and Eloise.