Haints of the Hills 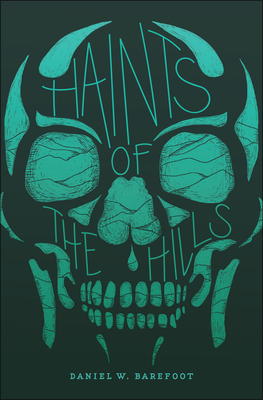 Haints of the Hills

Haints of the Hills collects ghost stories from North Carolina's mountainous west as part of the Haunted North Carolina series. This book includes stories told around campfires, in grandma's attic, and on nighttime drives on the curvy roads of the Blue Ridge Mountains. There is a story for each county in western North Carolina, twenty-seven in all, among them tales of ghosts, witches, demons, spook lights, unidentified flying objects, unexplained phenomena, and more.

Readers will be chilled to learn of the red-and-white-striped monstrosity that may still inhabit the Valley River at the site the Indians called the "Leech Place," as told in the Cherokee County story, "The Giant Bloodsucker." They'll be warmed by the Christ-like stranger who came to Bat Cave to repair a rift between neighbors, then vanished as mysteriously as he arrived, as revealed in the Henderson County story, "The Carpenter." They'll want to travel the lonely stretch of road in Avery County where locals have witnessed the spirit of Captain Robert Sevier, the seven-foot-tall hero of the American Revolution, as laid out in "The Long Trek Home."

Haints of the Hills contains a new foreword by Scott Mason, WRAL's "Tar Heel Traveler" and author of three North Carolina guidebooks. Other books in the Haunted North Carolina series feature tales of the coast, Seaside Spectres, and tales of the state's central region, Piedmont Phantoms.