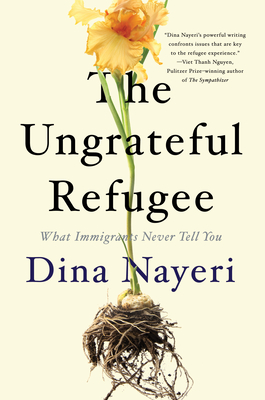 A Finalist for the 2019 Kirkus Prize in Nonfiction

"Nayeri combines her own experience with those of refugees she meets as an adult, telling their stories with tenderness and reverence.” —The New York Times Book Review

"Nayeri weaves her empowering personal story with those of the ‘feared swarms’ . . . Her family’s escape from Isfahan to Oklahoma, which involved waiting in Dubai and Italy, is wildly fascinating . . . Using energetic prose, Nayeri is an excellent conduit for these heart–rending stories, eschewing judgment and employing care in threading the stories in with her own . . . This is a memoir laced with stimulus and plenty of heart at a time when the latter has grown elusive.” —Star–Tribune (Minneapolis)

Aged eight, Dina Nayeri fled Iran along with her mother and brother and lived in the crumbling shell of an Italian hotel–turned–refugee camp. Eventually she was granted asylum in America. She settled in Oklahoma, then made her way to Princeton University. In this book, Nayeri weaves together her own vivid story with the stories of other refugees and asylum seekers in recent years, bringing us inside their daily lives and taking us through the different stages of their journeys, from escape to asylum to resettlement. In these pages, a couple fall in love over the phone, and women gather to prepare the noodles that remind them of home. A closeted queer man tries to make his case truthfully as he seeks asylum, and a translator attempts to help new arrivals present their stories to officials.
Nayeri confronts notions like “the swarm,” and, on the other hand, “good” immigrants. She calls attention to the harmful way in which Western governments privilege certain dangers over others. With surprising and provocative questions, The Ungrateful Refugee challenges us to rethink how we talk about the refugee crisis.

“A writer who confronts issues that are key to the refugee experience.” —Viet Thanh Nguyen, Pulitzer Prize–winning author of The Sympathizer and The Refugees

DINA NAYERI was born in Iran during the revolution and arrived in America when she was ten years old. She is the winner of the UNESCO City of Literature Paul Engle Prize and a National Endowment for the Arts literature grant, as well as a finalist for the Rome Prize and a Granta New Voices Project pick. Nayeri is the author of two novels—Refuge and A Teaspoon of Earth and Sea—and her work has been translated into fourteen languages and published in The New York Times, The Guardian, The Wall Street Journal, Granta, The Best American Short Stories, The O. Henry Prize Stories, and many other publications. The Ungrateful Refugee is her first book of nonfiction. A graduate of Princeton, Harvard, and the Iowa Writers’ Workshop, she lives in Paris, where she is a Fellow at the Columbia Institute for Ideas and Imagination.