The Heart of the Plum Village Teachings: The Forty Tenets of Zen Master Thich Nhat Hanh 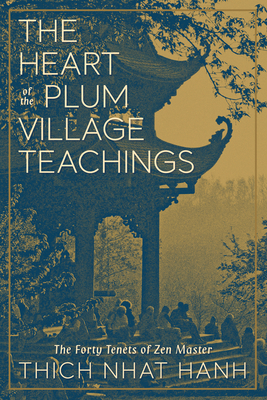 The Heart of the Plum Village Teachings: The Forty Tenets of Zen Master Thich Nhat Hanh

By  Thich Nhat Hanh , Translated by  Sister Annabel Laity
$ 34.95
Pre-Order (Not Yet Available)

Zen Master Thich Nhat Hanh presents the 40 essential aspects of Buddhism in a series of beautiful, profound, and scholarly reflections on the nature of reality.

Beginning with the First Tenet, "Space is not an unconditioned Dharma. It manifests together with time, matter, and consciousness," this book of principles contains the blueprint of Zen Master Thich Nhat Hanh's renewal of Buddhist teachings. For almost forty years during his exile in France, Thich Nhat Hanh has been the guiding teacher of monasteries of monks and nuns in the Buddhist tradition known as the Plum Village Community of Engaged Buddhism. During this time of teaching in the West, Thich Nhat Hanh identified, defined, and revised the teachings as a living, evolving body of Dharma. Underpinning their deceptively simple practices of mindful breathing, sitting, and walking lies a vibrant web of interconnected and poetic teachings. These teachings are a complete structure for a wholly modern Buddhism. The Heart of the Plum Village Teachings is a true textbook of refined contemplations on core Buddhist principles.

Thich Nhat Hanh is one of the most revered and influential spiritual teachers in the world today. Born in Vietnam in 1926, he became a Zen Buddhist monk at the age of sixteen. Over seven decades of teaching, he has published more than 100 books, which have sold more than four million copies in the United States alone. Exiled from Vietnam in 1966 for promoting peace, his teachings on Buddhism as a path to social and political transformation are responsible for bringing the mindfulness movement to Western culture. He established the international Plum Village Community of Engaged Buddhism in France, now the largest Buddhist monastery in Europe, and the heart of a growing community of practice centers around the world. He lives in Hue in Central Vietnam.