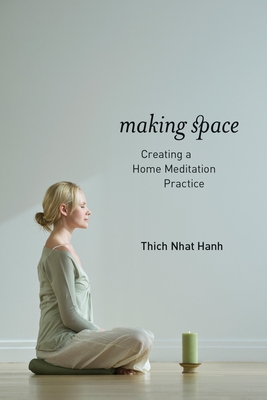 By  Thich Nhat Hanh
Paperback
$ 9.95
Out of Stock In Store (Click to Order)

Find peace and calm amid the busyness of your life with this new book by Zen Master Thich Nhat Hanh. Designed to be both inspiration and guidebook for those new to mindfulness practice, Making Space offers easy-to-follow instructions for setting up a breathing room, listening to a bell, sitting, breathing, and walking meditations, and cooking and eating a meal in mindfulness. Whether you live alone or with a family, this beautifully illustrated book can help you create a sense of retreat and sanctuary at home.

THICH NHAT HANH is one of the most revered and influential spiritual teachers in the world today. Born in Vietnam in 1926, he became a Zen Buddhist monk at the age of sixteen. Over seven decades of teaching, he has published more than 100 books, which have sold more than five million copies in the United States alone. Exiled from Vietnam in 1966 for promoting peace, his teachings on Buddhism as a path to social and political transformation are responsible for bringing mindfulness to the West. In 1982 he established the international Plum Village Community of Engaged Buddhism in France, now the largest Buddhist monastery in Europe. He lives in Hue in Central Vietnam.