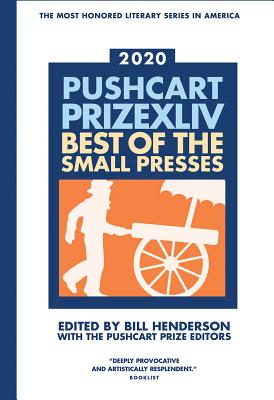 By  Bill Henderson
Paperback
$ 19.95
Out of Stock In Store (Available to Order)

The 44th edition of the most celebrated literary series in America.

As Booklist’s Donna Seaman commented on edition #43, “a harvesting of the year’s finest stories, poems and essays…a deeply provocative and artistically resplendent anthology.” This current edition is further proof that important and exciting writing is found in small presses scattered around the country and the world.As the variety of selections in Pushcart Prize XLIV indicates, it is an eclectic and constantly changing community. Over 70 authors are included from more than 50 presses. The Pushcart series is winner of The Sandrof Lifetime Achievement Award from The National Book Critics Circle, and the Poets & Writers/Barnes & Nobel Writers For Writers citation, plus many other awards. Here are 600 pages of literary brilliance from both new and established authors, featuring traditional and experimental work.

Bill Henderson is the founder and editor of the Pushcart Prize. He received the 2006 National Book Critic Circle’s Lifetime Achievement Award and the Poets & Writers / Barnes & Noble Writers for Writers Award. He is also the author of several memoirs, including All My Dogs: A Life. The founder of the Lead Pencil Club, Henderson lives on Long Island and In Maine where he runs the Pushcart bookstore – “the world’s smallest bookstore.”