Love of Country: A Hebridean Journey 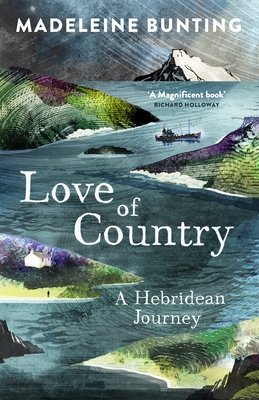 Love of Country: A Hebridean Journey

The Hebrides hold a remarkable place in the imaginations of Scotland and England. On the outer edge of the British Isles and facing the Atlantic Ocean, these iconic islands form part of Europe's boundary. Because of their unique position, they have been at the centre of a network of ancient shipping routes which has led to a history of cultures colliding and merging. Home to a long and rich Gaelic tradition, they have attracted saints and sinners, and artists and writers, inspiring awe and dread as well as deep attachment.

Over six years, Madeleine Bunting travelled to the Hebrides, exploring their landscapes, histories and magnetic pull. With great sensitivity and perceptiveness, she delves into the meanings of home and belonging, which in these islands have been fraught with tragedy as well as tenacious resistance. She finds that their history of dispossession and migration played a part in the British imperial past. And perhaps more significant still is the extent of the islands' influence on ideas of Britishness. Love of Country shows how the islands' history is a backdrop for contemporary debates about the relationship between our nations, how Britain was created, and what Britain has meant - for good and for ill.

Madeleine Bunting was for many years a columnist for the Guardian, which she joined in 1990. Born in North Yorkshire, Bunting read History at Cambridge and Politics at Harvard. She is the author of: The Model Occupation: The Channel Islands under German Rule, 1940-45; Willing Slaves: How the Overwork Culture is Ruling Our Lives (both published by HarperCollins); and The Plot: A Biography of an English Acre (published by Granta in 2009) which won the Portico Prize and was shortlisted for the Ondaatje Prize. She left the Guardian in 2013 to concentrate on her writing. She lives in London with her family.