Antarctica: A History in 100 Objects 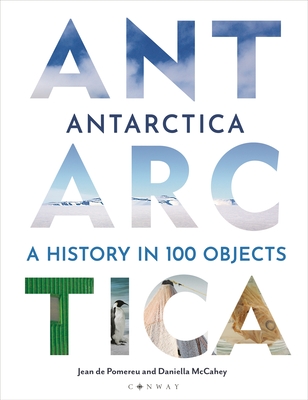 Antarctica: A History in 100 Objects

This stunning and powerfully relevant book tells the history of Antarctica through 100 varied and fascinating objects drawn from collections around the world.

Retracing the history of Antarctica through 100 varied and fascinating objects drawn from collections across the world, this beautiful and absorbing book is published to coincide with the 250th anniversary of the first crossing into the Antarctic Circle by James Cook aboard Resolution, on 17th January 1773. It presents a gloriously visual history of Antarctica, from Terra Incognita to the legendary expeditions of Shackleton and Scott, to the frontline of climate change.

One of the wildest and most beautiful places on the planet, Antarctica has no indigenous population or proprietor. Its awe-inspiring landscapes – unknown until just two centuries ago – have been the backdrop to feats of human endurance and tragedy, scientific discovery, and environmental research. Sourced from polar institutions and collections around the world, the objects that tell the story of this remarkable continent range from the iconic to the exotic, from the refreshingly mundane to the indispensable:

- snow goggles adopted from Inuit technology by Amundsen
- the lifeboat used by Shackleton and his crew
- a bust of Lenin installed by the 3rd Soviet Antarctic Expedition
- the Polar Star aircraft used in the first trans-Antarctic flight
- a sealing club made from the penis bone of an elephant seal
- the frozen beard as a symbol of Antarctic heroism and masculinity
- ice cores containing up to 800,000 years of climate history

This stunning book is both endlessly fascinating and a powerful demonstration of the extent to which Antarctic history is human history, and human future too.

Jean de Pomereu is a Research Fellow at the Scott Polar Research Institute, University of Cambridge. His research spans the history of Antarctic science, exploration and visual culture. He has participated in many scientific and artistic expeditions to Antarctica.

Daniella McCahey is an Assistant Professor in British History at Texas Tech University. Her research includes the history of geology and geophysics in Antarctica, gender histories in Antarctic research stations and histories of Antarctic botany and volcanology.