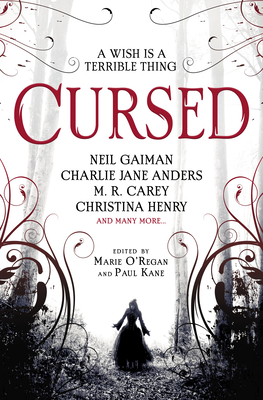 ALL THE BETTER TO READ YOU WITH

It's a prick of blood, the bite of an apple, the evil eye, a wedding ring or a pair of red shoes. Curses come in all shapes and sizes, and they can happen to anyone, not just those of us with unpopular stepparents...

Marie O'Regan is a British Fantasy Award-nominated writer and editor of horror and dark fantasy fiction. She is the author of four collections, Mirror Mere, Bury Them Deep, In Times of Want and Other Stories and The Last Ghost and Other Stories, and her anthologies include Hellbound Hearts, The Mammoth Book of Body Horror, Carnivale: Dark Tales From the Fairground, The Mammoth Book of Ghost Stories by Women, Phantoms, Exit Wounds and Wonderland. She is Co-Chair of the UK chapter of the Horror Writers' Association and lives in Derbyshire, UK. She tweets @Marie_O_Regan.

Paul Kane is the award-winning and bestselling author/editor of over 90 books, including the Arrowhead trilogy (gathered together in the sellout Hooded Man omnibus, revolving around a post-apocalyptic version of Robin Hood), The Butterfly Man and Other Stories, Sherlock Holmes and the Servants of Hell, Before, Arcana and Pain Cages (an Amazon #1 bestseller). He is a respected anthologist, editing books such as Beyond Rue Morgue, The Mammoth Book of Body Horror, Hellbound Hearts and Exit Wounds. His website can be found at www.shadow-writer.co.uk and he tweets @PaulKaneShadow