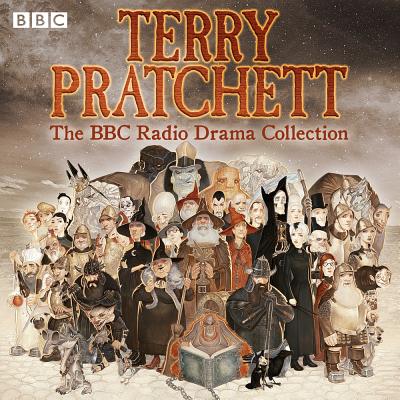 A collection of the full-cast BBC Radio dramatisations of novels by Terry Pratchett.

Somewhere on the frontier between thought and reality exists the Discworld, a parallel time and place which might sound and smell very much like our own, but which looks completely different…

Now being published for the very first time, the adaptations in this collection are:

Mort
Hopeless young peasant Mort is hired as an apprentice to Death. He'll have free board, use of the company horse, and being dead isn’t even compulsory. In fact, it's a dream job—until he discovers that it can be a killer on his love life...

Wyrd Sisters
Three witches meet on a blasted heath. A king is cruelly murdered. A child heir and the kingdom’s crown are both missing. But Granny Weatherwax finds that meddling in royal politics is a lot more complicated than certain playwrights would have you believe...

Guards! Guards!
In Ankh-Morpork, the Haves and the Have-Nots are about fall out. Again. The Night Watch’s Captain Vimes is used to this but when the Have-Nots find the key to a lethal, dormant weapon that even they don’t understand, he knows it’s time so sober up.

Eric
When precocious young Eric Thursley summons a demon from the loathsome pit to fulfil his every wish, he wants what everyone wants—immortality, to rule the world, and have the most beautiful woman love him. Instead he gets Rincewind, the Disc’s most incompetent wizard.

Small Gods
On the Discworld, Gods are as numerous as herring roe, all elbowing for space at the top. In such a competitive environment, you need an acolyte, and fast. For the Great God Om, Brutha is the Chosen One, or at least the only One available…

Night Watch
Living in the past is hard. Dying in the past is incredibly easy, especially when there is a serial killer on the loose who targets coppers. Commander Sam Vimes of the City Watch is back in his own rough, tough past, and he has a job to do.

***Bonus Story*** In addition to these Discworld novels, this collection will also include a full-cast dramatisation of Only You Can Save Mankind, from the Johnny Maxwell series. As an alien fleet crosses his computer screen, Johnny prepares to blow the ScreeWee into a million pieces...

Sir Terry Pratchett was the acclaimed creator of the global bestselling Discworld series, the first of which, The Colour of Magic, was published in 1983. In all, he was the author of fifty bestselling books. His novels have been widely adapted for stage and screen, and he was the winner of multiple prizes, including the Carnegie Medal, as well as being awarded a knighthood for services to literature. Worldwide sales of his books now stand at 70 million, and they have been translated into thirty-seven languages.