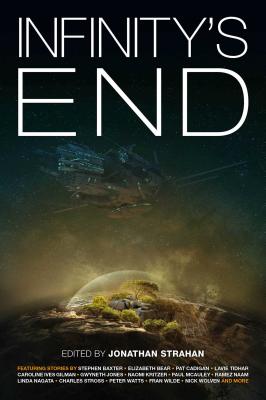 Humanity has made the universe home. On the outskirts of the solar system, beyond the asteroid fields, deep in space, under the surface of planets, in the ruins of fallen civilisations, in the flush of new creation: life finds a way.

From intelligent velociraptors to digital ghosts; from a crèche on an asteroid to an artist using a star system as a canvas, this is a future where Earth’s children have adapted to every nook and cranny of existence.

This is life on the edge of the possible.

Jonathan Strahan is a World Fantasy Award award-winning editor, anthologist, and podcaster. He has edited more than 70 books, is reviews editor for Locus, a consulting editor for Tor.com, and co-host and producer of the Hugo-nominated Coode Street Podcast.

Lavie Tidhar was in Dar-es-Salaam during the American embassy bombings in 1998, and stayed in the same hotel as the Al Qaeda operatives in Nairobi. Since then he and his now-wife have narrowly avoided both the 2005 London, King’s Cross and 2004 Sinai attacks—experiences that led to the creation of Osama. He is the author of many novels, including the Bookman trilogy and is a prolific short story writer.

Justina Robson is the UK author of thirteen science fiction and fantasy novels and many short stories. In addition to her original works, including a novel set in the Catt and Fisher universe – Salvation’s Fire – she has also written The Covenant of Primus, the 'bible' of The Transformers. She has tutored for the Arvon Foundation and been an awards judge for the Arthur C Clarke Award. She sometimes works as a freelance developmental editor. Visit www.justinarobson.co.uk or follow @JustinaRobson on Twitter.