Gender and Early Television: Mapping Women's Role in Emerging Us and British Media, 1850-1950 (Library of Gender and Popular Culture) 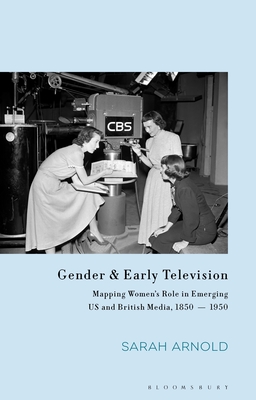 Gender and Early Television: Mapping Women's Role in Emerging Us and British Media, 1850-1950 (Library of Gender and Popular Culture)

Between the nineteenth century and the mid-twentieth century television transformed from an idea to an institution. In Gender and Early Television, Sarah Arnold traces women's relationship to the new medium of television across this period in the UK and USA. She argues that women played a crucial role in its development both as producers and as audiences long before the 'golden age' of television in the 1950s.

Beginning with the emergence of media entertainment in the mid-nineteenth century and culminating in the rise of the post-war television industries, Arnold claims that, all along the way, women had a stake in television. As keen consumers of media, women also helped promote television to the public by performing as 'television girls'. Women worked as directors, producers, technical crew and announcers. It seemed that television was open to women. However, as Arnold shows, the increasing professionalisation of television resulted in the segregation of roles. Production became the sphere of men and consumption the sphere of women. While this binary has largely informed women's role in television, through her analysis, Arnold argues that it has not always been the case.

Sarah Arnold is Lecturer in Media at Maynooth University, Ireland. Her previous books include Maternal Horror Film: Melodrama and Motherhood (2013) and the co-authored Film Handbook (2013). Her research focuses on women and film and television. She is a regular contributor to the Critical Studies in Television blog and RTE Brainstorm.