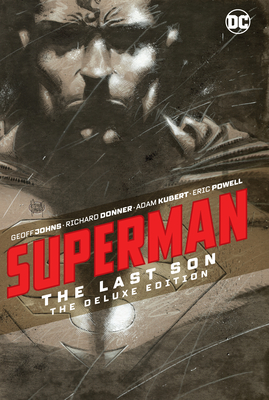 By  Geoff Johns , Richard Donner , Illustrated By  Adam Kubert
$ 49.99
Out of Stock In Store (Click to Order)

Who is the true last son of Krypton?

Since he first arrived on our world as an infant, the Man of Steel believed that he was the only survivor of his native planet. But then another boy in a rocket crash-lands in Metropolis, and the unearthly powers he displays convince Clark Kent and his wife, Lois Lane, that they should raise him as their own. Joining Superman’s family, however, means taking on his enemies as well as his allies. Newly escaped from the Phantom Zone, General Zod and his renegade followers are determined to seize the child. Why is this youngster so precious? And can Superman protect both him and his adopted home from Zod’s plan to transform the Earth into a new Krypton?

Would-be warlords aren’t the only challenge that the Man of Tomorrow must face. His own imperfect clone, the misshapen monstrosity known as Bizarro, has created a new world to reflect his twisted body and mind—a mockery of a planet, where chaos and catastrophe are celebrated and ugliness is the ultimate virtue. When its zombie-like inhabitants turn on their misguided maker, he decides to kidnap Clark Kent’s adoptive father and force him to help subdue his subjects—or die trying. To rescue the man who raised him, Superman must brave the horrors of Bizarro World, where he will fight funhouse-mirror versions of some of his greatest foes—and friends.

The dynamic writing team of New York Times bestselling author GEOFF JOHNS (Doomsday Clock, Blackest Night) and famed film director RICHARD DONNER (Superman: The Movie, Lethal Weapon) joins with two of comics’ most acclaimed artists—ADAM KUBERT (Wolverine, X-Men) and ERIC POWELL (The Goon)—to bring their timeless tales of the Man of Steel to life! This special deluxe edition assembles for the first time in a single hardcover volume all of Johns and Donner’s celebrated collaborations from the pages of Action Comics and includes a special sketchbook section from Kubert as well as an introduction by actor MARC McCLURE, who portrayed Jimmy Olsen in the 1980s Superman film series. Collects Action Comics #844-846, #851, and #855-857, and Action Comics Annual #10-11.

Geoff Johns is Chief Creative Officer of DC Entertainment. He has written highly acclaimed stories starring Superman, Green Lantern, the Flash, the Teen Titans, and the Justice Society of America. He is the author of the New York Times bestselling graphic novels GREEN LANTERN: RAGE OF THE RED LANTERNS, GREEN LANTERN: SINESTRO CORPS WAR, JUSTICE SOCIETY OF AMERICA: THY KINGDOM COME, and SUPERMAN: BRAINIAC, and is the author of two of DC Comics' biggest, most recent events, BLACKEST NIGHT, and FLASHPOINT. Johns has also written episodes of the TV series Smallville and Robot Chicken. He wrote the story of the DC Universe Online massively multiplayer action game from Sony Online Entertainment LLC. Currently, he is the writer of the new series JUSTICE LEAGUE, AQUAMAN, and GREEN LANTERN.