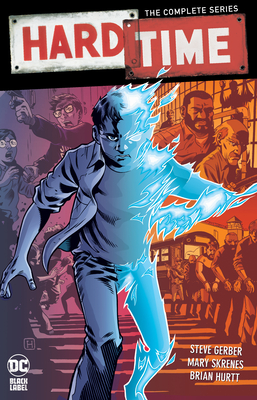 What was supposed to be a stupid prank ends up costing four students their lives...and 15-year-old Ethan Harrow his future. But something powerful has been growing within Ethan...and now it's escaped.

The day that changed Ethan Harrow's life forever--was also the day that cost him his freedom. When Ethan and Brandon agreed to prank the jocks at school, Ethan thought they would get a laugh. When Brandon goes over the edge...Ethan manifests some metaphysical force that kills him. The results of the trial are swift and severe, the judge sentences Ethan to fifty years in prison.

Will this powerful force living inside Ethan end up being a source of power, a chance at redemption, or the cruelest of curses? And is there anyone who can help him control it?

Best known as the creator of Howard the Duck, Steve Gerber has established a reputation for working at the cutting edge of comics. Steve has put words in the mouths of virtually every major character in the comic book world -- from Superman to Scooby Doo -- and his work has appeared under the imprint of almost every major publisher in the field. He has also written extensively in animation and television, and even has a computer book to his credit.