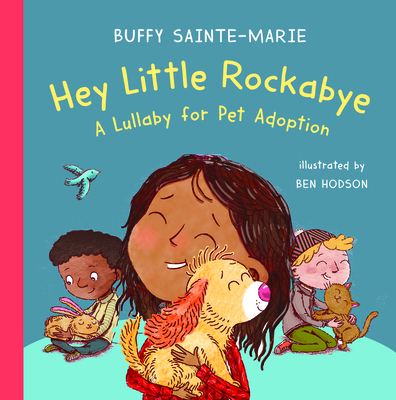 By  Buffy Sainte-Marie , Illustrated By  Ben Hodson
$ 16.95
Out of Stock In Store (Click to Order)

Young and old alike will cheer and sing along with this heartfelt picture book about pet adoption based on a new song by Academy Award-winning singer-songwriter Buffy Sainte-Marie.

In this tender and moving picture book, a puppy is looking for someone to love him. Will the girl who rescues him convince her parents to let her keep the little dog? Buffy Sainte-Marie advocates "putting the songs to work" and, like her other lyrics, Hey Little Rockabye conveys an important message about finding love and acceptance. Brought to life in charming illustrations by Ben Hodson, Hey Little Rockabye shares a not-yet-released song with the world for the first time.

With the release of the first-ever recording to coincide with the publication of the book, Hey Little Rockabye can now be read--or sung--by old and young alike for years to come.

Cree singer-songwriter Buffy Sainte-Marie has made her voice heard through her music, art, and activism, establishing herself among the ranks of folk greats. Her long career has seen her rise to stardom on the folk circuit, with forays into country, rock, soundtracks, acting, activism, and children's television. Now, she adds children's picture book author to her incredible list of accomplishments. Ben Hodson is an award-winning illustrator of more than twenty children's books. He lives with his family in Peterborough, Ontario.