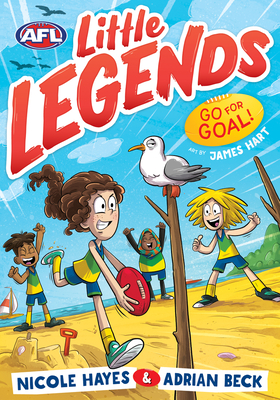 Little Legends follows Oz, Ellie and Sanjay Little, star players for the Fresca Bay Falcons, on a series of hilarious and action-packed adventures that celebrate the great game of Australian Rules. Ellie is in a goal-kicking slump. She has a feeling her brand-new footy boots are to blame – that, or her brother Oz and all the annoying pranks he keeps playing on her! Is it possible that without her lucky routine, Ellie just isn’t that good at footy? Or is footy about more than just luck? Perfect for fans of Tiny Timmy, Real Pigeons and Weirdo, Little Legends is the only official AFL junior fiction series. It’s packed with fun and will entertain footy-mad kids for hours!

Nicole Hayes is an award-winning author, podcaster and footy fanatic. She is one-sixth of the award-winning all-female Australian football podcast and radio show, The Outer Sanctum (on the ABC). Nicole has collaborated with fellow Sanctumer Alicia Sometimes on A Footy Girl’s Guide to the Stars of 2017 and co-edited From the Outer: Footy Like You’ve Never Heard It. Nicole has also written chapters for Balancing Acts: Women in Sport and Speccy-tacular AFL Stories. James Hart is a Melbourne based illustrator, creator and children’s book maker. He launched into professional illustrating during his last year of studies in 2003. Since then he has worked on many projects from toy designs to stamps (Let’s Get Active series 2009) to book illustration and animation for multiple clients, studios and publishers across Australia, NZ and the UK. Adrian Beck is a part-time TV producer, part-time writer and full-time AFL fan. He writes funny, action-packed adventure stories for kids, including the Derek Dool: Supercool series, the Champion Charlies series, the Alien Zoo series, and Stuff Happens – Dale. He co-authored the best-selling series Kick it to Nick with AFL Hall of Fame inductee Shane Crawford, and coedited Total Quack Up and Total Quack Up Again with Sally Rippin. All of Adrian’s stories are fun to read – even for kids who struggle to get interested in books.