Clubbable Man: Essays on Eighteenth-Century Literature and Culture in Honor of Greg Clingham 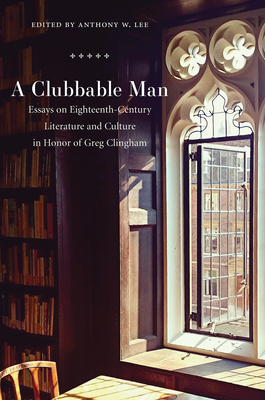 Clubbable Man: Essays on Eighteenth-Century Literature and Culture in Honor of Greg Clingham

Samuel Johnson famously referred to his future biographer, the unsociable magistrate Sir John Hawkins, as “a most unclubbable man." Conversely, this celebratory volume gathers distinguished eighteenth-century studies scholars to honor the achievements, professional generosity, and sociability of Greg Clingham, taking as its theme textual and social group formations. Here, Philip Smallwood examines the “mirrored minds” of Johnson and Shakespeare, while David Hopkins parses intersections of the general and particular in three key eighteenth-century figures. Aaron Hanlon draws parallels between instances of physical rambling and rhetorical strategies in Johnson’s Rambler, while Cedric D. Reverand dissects the intertextual strands uniting Dryden and Pope. Contributors take up other topics significant to the field, including post-feminism, travel, and seismology. Whether discussing cultural exchange or textual reciprocities, each piece extends the theme, building on the trope of relationship to organize and express its findings. Rounding out this collection are tributes from Clingham’s former students and colleagues, including original poetry.

ANTHONY W. LEE is an expert on Samuel Johnson and his circle, mentoring, and intertextuality. He has published more than forty essays on Johnson and eighteenth-century literature and culture, and six books, most recently New Essays on Samuel Johnson: Revaluation, Community and Solitude: New Essays on Johnson’s Circle (Bucknell University Press), and “Modernity Johnson”: Samuel Johnson Among the Modernists. He has taught at a number of colleges and universities, including the University of Arkansas, Kentucky Wesleyan College, the University of the District of Columbia, and the University of Maryland University College, where he also served as director of the English and humanities program. He is currently a visiting lecturer at Arkansas Tech University and lives in Dardanelle, Arkansas.