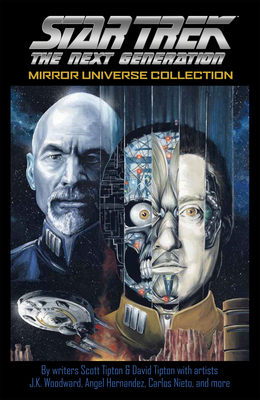 Go into the alternate "Mirror, Mirror" universe to meet the cold-blooded crew of the I.S.S. Enterprise and their captain, the ruthless Jean-Luc Picard, in this collection of three graphic novels!

Space... The final frontier. These are the voyages of the I.S.S. Enterprise. Its continuing mission: to conquer strange new worlds, to enslave new life and new civilizations... To boldly go where no one has gone before! In the other-dimensional Mirror Universe there is no United Federation of Planets, only a cruel Terran Empire, where advancement comes through assassination, brutality is commonplace, and kindness is a weakness.

In Mirror Broken, the Terran Empire is on its last legs in its war with the Klingon-Cardassian Alliance, but Captain Jean-Luc Picard has learned of a final chance for victory: a revolutionary new Galaxy-class starship that could turn the tide of the war. The ship is called Enterprise--and Picard intends to take it.

In Through The Mirror, when the Enterprise-D discovers a burned-out, pillaged Andorian vessel, the search for the culprits leads to some startlingly familiar faces. But, how did the Mirror Universe crew find their way to ours, and what does Emperor Spock have to do with it? Plus, it's interstellar espionage aboard the Enterprise-D when the Mirror Universe crew infiltrates Captain Picard's ship!

And in Terra Incognita, the Enterprise crew returns to business as usual, little realizing the serpent in their midst--one of their own has been replaced! Six stories focusing on fan-favorite crew members of the Enterprise-D--including Deanna Troi, Wesley Crusher, and Selar--each connected by the machinations of this sinister doppelganger.