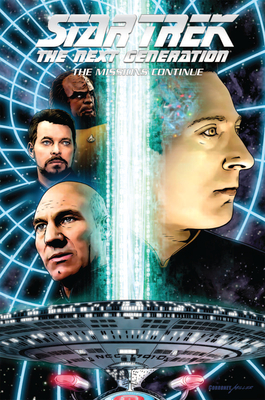 Follow the intergalactic adventures of Captain Jean-Luc Picard and the crew of the U.S.S. Enterprise (NCC-1701D) as they explore new worlds.

In The Space Between, travel to Tigan-7, Kandom 9, uncharted space, and more--each leading the dedicated crew of the Enterprise into unexpected adventures. By David Tischman and Casey Maloney.

In Intelligence Gathering, what seems to be a series of unrelated missions is soon revealed to be part of a larger conspiracy involving a threat unlike any that Picard has ever faced. Can the Enterprise crew piece together the puzzle before it's too late? By Scott Tipton, David Tipton, and David Messina.

In Last Generation, a Myriad Universe title, Starfleet is no more! The Federation lies in ruin and the Klingons have conquered Earth. But a resistance, led by Jean-Luc Picard, seeks to free humanity from Klingon rule. Now, finally, they may have the means to do it: an android named Data! By Andrew Steven Harris and Gordon Purcell.

In Ghosts, Captain Picard and the crew of the Enterprise respond to a distress call and find a terribly wounded scientist aboard a marooned ship. While evaluating the planet below (and its two warring nations) for possible Federation membership, Picard discovers to his horror that the survivor of the disaster is foreseeing his death. By Zander Cannon and Javier Aranda.

In Hive, it's the distant future and the entire galaxy has been completely assimilated by Borg and its king... Locutus! The only hope lies in the past, in the hands of Captain Jean-Luc Picard and the crew of the starship Enterprise! By Brannon Braga, Terry Matalas, Travis Fickett, and Joe Corroney.