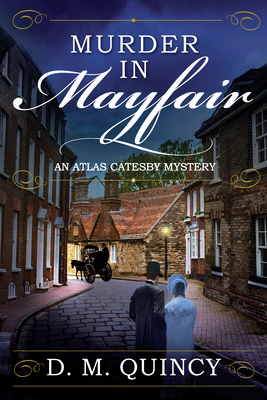 In 1814, Atlas Catesby, a brilliant adventurer and youngest son of a baron, is anxious to resume his world travels after being injured in a carriage accident in London. But his plans are derailed when, passing through a country village, he discovers a helpless woman being auctioned off to the highest bidder—by her husband.

In order to save her from being violated by another potential buyer, Atlas purchases the lady, Lilliana, on the spot to set her free. But Lilliana, desperate to be with her young sons and knowing the laws of England give a father all parental rights, refuses to be rescued—until weeks later when her husband is murdered and Atlas is the only one who can help clear her name of the crime.

Fortunately, Atlas is a master at solving complicated puzzles, with games as well as the intricacies of human motivation, and finds himself uniquely suited to the task, despite the personal peril it may put him in. But soon Altas learns the dead man had many secrets—and more than a few enemies willing to kill to keep them quiet—in Murder in Mayfair, the first in a new historical mystery series by D. M. Quincy.

D. M. Quincy is an award-winning journalist who—after covering many unsolved murders—decided to conceive her own stories in which a brilliant amateur detective always gets the bad guy (or girl). As a US Foreign Service brat, D. M. was bitten by the travel bug practically at birth, and like her protagonist Atlas Catesby, tries to visit far-flung places as often as she can. When she isn’t hunched over her laptop researching ways for her villains to kill people, D. M. devours foreign television mystery series on Netflix and plots her next travel adventure. She lives in Virginia with her family.