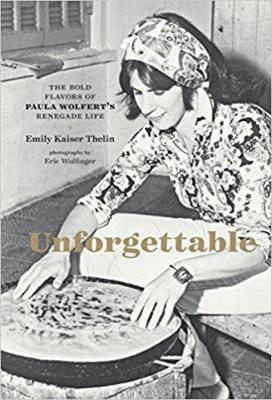 "UNFORGETTABLE: Bold Flavors from Paula Wolfert's Renegade Life" tells the incredible life story of a culinary legend. This pioneering biographical cookbook shares 50+ of her most unforgettable dishes, many of them in line with her new brain-healthy diet. To produce it, we assembled a cookbook publishing dream team, collectively responsible for dozens of award-winning, game-changing books. Together we explored the relationship between food and memory, as we cooked those dishes for her, and discovered what recollections they provoked. The gripping narrative traces the arc of her career, from her Brooklyn childhood to her adventures in the farthest corners of the Mediterranean. Anecdotes and adventure stories come Paula's extensive personal archive, from over 50 interviews with Paula herself, and from dozens of interviews with food writers and chefs whom she influenced and influenced her—from Alice Waters and Thomas Keller to Diana Kennedy, André Daguin, and Jacques Pépin. For the recipes, we have culled Wolfert's seminal cookbooks and hundreds of magazine articles to deliver 50 of her most bold-flavored dishes. Highlights include: Grilled pork skewers in a tangy-sweet marinade of pomegranate molasses and dill, a dish from the Caucasus mountains of Central Asia Creamy avocado toasts, adapted from a dish by iconic Spanish chef Ferran Adrià Shrimp suquet, a kind of Catalonian stir fry, with ground almonds and a savory hit of cognac. Wolfert's recipes are like no other—each is a new discovery, yielding incredible flavors, often using unusual techniques and ingredients, often with an incredible backstory. Sometimes they're really hard. But this book focuses on her most accessible dishes. Some may also be good for your mind, in line with her new brain-centric diet, which emphasizes healthy meats and fresh vegetables. The recipes include something for everyone, whether paleo, vegan, omnivore, or gluten-free.

Emily Kaiser Thelin is a writer and editor based in Berkeley, California, a former restaurant cook and a two-time James Beard finalist. Her articles have appeared in the New York Times, San Francisco Chronicle, and Oprah, among other publications. For four years she was an editor at Food & Wine magazine, where she oversaw Wolfert's Master Cook column. "I’ve wanted to write Paula's biography since we traveled together to Morocco, when she told me the extraordinary circumstances that led her to write her first book on Moroccan food," she says. Thelin was one of the first people Wolfert told about her diagnosis, and the first to write about it, in a feature for the Washington Post. To learn more about Emily, you can visit emilythelin.com.

Andrea Nguyen is the Paula Wolfert of Asian cookery. Based in Northern California, she continues to build a critically-acclaimed library of authoritative books on the foods of Asia. From her first, Into the Vietnamese Kitchen, to her latest, The Banh Mi Handbook, her work is widely admired by food cognoscenti for her exhaustive research and her commitment to authenticity and accessibility. Andrea acted as majordomo on the project, as editor and project manager.

Eric Wolfinger is a San Francisco-based photographer and former restaurant cook who brings a chef’s eye to his exceptional images. He has photographed such award-winning cookbooks as Corey Lee’s Benu, David Kinch’s Manresa, Gabrielle Hamilton’s Prune, and Chad Robertson’s Tartine Bread Book. Eric oversees the photography and videography for this book.