Music as a Humanity: And Other Essays 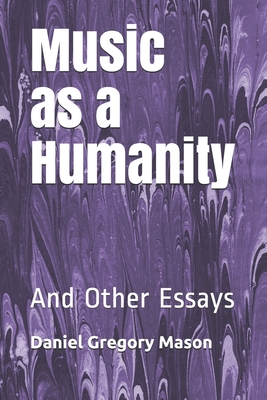 Music as a Humanity: And Other Essays

THESE essays, published in various magazines during recent years, are here reprinted with but slight changes. In some cases, as in the accounts of the first three festivals of chamber music at Pittsfield, it seemed desirable to preserve first impressions just as they were received and expressed at the time, since whatever value the papers may have will be largely historical. The same thing is true of "A Society for Publication," "A Practical Suggestion," and "Music Patronage as an Art." The essays in the third division, "Of Esthetics and Psychology," have been suggested, all but two, by books or articles which date them with some exactitude. Thus that on Vernon Lee has been reprinted substantially as it appeared in 1906. The idea of "A Note on Tonal Chiaroscuro" is due to a conversation with Mr. Leopold Stokowski, whose conducting is so beautiful in its adjustment of values. "An International Language," written for the American Association for International Conciliation before the war (June, 1913), retains now, it is hoped, any value it may have had then. The need for international sympathy is greater than ever, and it is now clearer than it was in 1913 that the way to political cooperation must be slowly and patiently opened up by art, literature, and other super-national interests, among which music has an important place.