We Are Your Children Too: Black Students, White Supremacists, and the Battle for America's Schools in Prince Edward County, Virginia 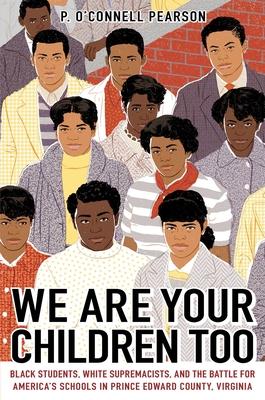 We Are Your Children Too: Black Students, White Supremacists, and the Battle for America's Schools in Prince Edward County, Virginia

This revelatory and gripping nonfiction middle grade book explores a deeply troubling chapter in American history that is still playing out today: the strange case of Prince Edward County, Virginia, the only place in the United States to ever formally deny its citizens a public education, and the students who pushed back.

In 1954, after the passing of Brown v. the Board of Education, the all-White school board of one county in south central Virginia made the decision to close its public schools rather than integrate. Those schools stayed closed for five years.

While the affluent White population of Prince Edward County built a private school—for White children only—Black children and their families had to find other ways to learn. Some Black children were home schooled by unemployed Black teachers. Some traveled thousands of miles away to live with relatives, friends, or even strangers. Some didn’t go to school at all.

But many stood up and became young activists, fighting for one of the rights America claims belongs to all: the right to learn.

P. O’Connell Pearson has always taught history—first in the high school classroom and then as a curriculum writer and editor across grade levels. Ready to share her enthusiasm for stories of the past in a new way, she earned an MFA in writing for young people from Lesley University and now writes narrative nonfiction for ages ten and up. Her books have received recognition from Bank Street, NCSS, the New-York Historical Society, Arizona Library Association, and more. When Pearson is not writing about history, she can often be found talking about history as a volunteer with the National Park Service in Washington, DC.