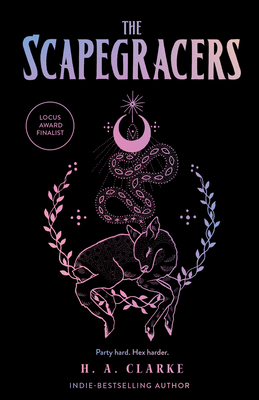 By  Hannah Abigail Clarke
Hardcover
$ 17.95
On Our Shelves Now

An outcast teenage lesbian witch finds her coven hidden amongst the popular girls in her school, and performs some seriously badass magic in the process.

Skulking near the bottom of West High’s social pyramid, Sideways Pike lurks under the bleachers doing magic tricks for Coke bottles. As a witch, lesbian, and lifelong outsider, she’s had a hard time making friends. But when the three most popular girls pay her $40 to cast a spell at their Halloween party, Sideways gets swept into a new clique. The unholy trinity are dangerous angels, sugar-coated rattlesnakes, and now–unbelievably–Sideways’ best friends.

Together, the four bond to form a ferocious and powerful coven. They plan parties, cast curses on dudebros, try to find Sideways a girlfriend, and elude the fundamentalist witch hunters hellbent on stealing their magic. But for Sideways, the hardest part is the whole ‘having friends’ thing. Who knew that balancing human interaction with supernatural peril could be so complicated?

Rich with the urgency of feral youth, The Scapegracers explores growing up and complex female friendship with all the rage of a teenage girl. It subverts the trope of competitive mean girls and instead portrays a mercilessly supportive clique of diverse and vivid characters. It is an atmospheric, voice-driven novel of the occult, and the first of a three-book series.

Hannah Abigail Clarke is here and queer, etc. They have been published in PRISM international, Portland Review, and Eidolon. They were a 2019 Lambda Literary Fellow in Young Adult Fiction and a Pushcart nominee.  They currently research queerness, labor, and monstrosity in grad school. The Scapegracers is their first novel.

Four girls - the popular trio and one outcast - form a witch's coven and discover real magic. That's the story on the surface. Really, this is a book about finding friendships that feel like home - and fighting for them.

The Cost of Knowing

We Hunt the Flame (Sands of Arawiya #1)