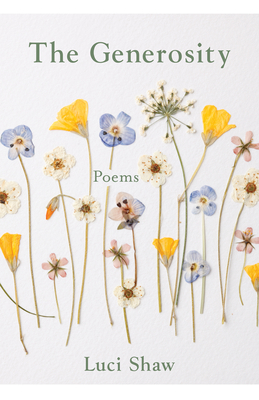 "Rejoice, readers, as you receive the generosity of Luci Shaw's 76 new grace-infused parable poems. Autobiography once more merges with theology as these poems illuminate in splendored natural detail  how the seasons of creation  parallel and explain the seasons of her  life as a poet. Again and again, these poems shower us with glorious epiphanies from the natural world as it reflects God's generosity at work such as "spring's impossible news of green." These poems confirm that in poetry as in faith "ripeness is all." Like Wordsworth, Luci is celebrated for being a highly gifted landscape poet whose works are rich in imagery from the physical world—meadows filled with seeds, flowers, and also poems which are like "shoots" in Luci's writing life. Animals, too, great and small (beetles, cricket, and voles to bears and whales) play a major role in Luci's poetics of creation; God is likened to a great bear who leaves paw tracks for us to follow. In their deep faith and vibrant colors and designs, the poems in Generosity might be considered Luci's Book of Kells. We need to be like Luci's father who carried her poems in his briefcase to show his friends." —Philip C. Kolin, Author, Reaching Forever: Poems; Distinguished Professor of English (Emeritus), University of Southern Mississippi

Luci Shaw was born in London, England, in 1928. A poet and essayist, since 1986 she has been Writer in Residence at Regent College, Vancouver. Author of over thirty-seven books of poetry and creative non-fiction, her writing has appeared in numerous literary and religious journals. In 2013 she received the 10th annual Denise Levertov Award for Creative Writing from Seattle Pacific University. She lives with her husband, John Hoyte, in Bellingham, WA.