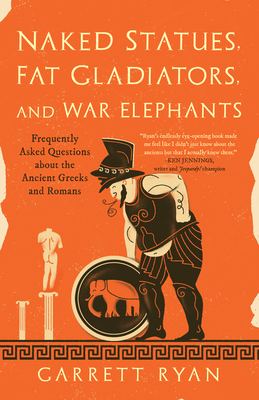 By  Garrett Ryan
Paperback
$ 21.95
Out of Stock In Store (Available to Order)

Why didn't the ancient Greeks or Romans wear pants? How did they shave? How likely were they to drink fine wine, use birth control, or survive surgery? In a series of short and humorous essays, Naked Statues, Fat Gladiators, and War Elephants explores some of the questions about the Greeks and Romans that ancient historian Garrett Ryan has answered in the classroom and online. Unlike most books on the classical world, the focus is not on famous figures or events, but on the fascinating details of daily life. Learn the answers to: How tall were the ancient Greeks and Romans? How long did they live? What kind of pets did they have? How dangerous were their cities? Did they believe their myths? Did they believe in ghosts, monsters, and/or aliens? Did they jog or lift weights? How did they capture animals for the Colosseum? Were there secret police, spies, or assassins? What happened to the city of Rome after the Empire collapsed? Can any families trace their ancestry back to the Greeks or Romans?

Garrett Ryan earned his PhD in Greek and Roman History from the University of Michigan. Besides teaching at several universities and authoring a series of academic works, he has brought ancient history to life for hundreds of thousands of readers through his contributions to online forums and his website toldinstone.com. He lives in Chicago.