The Case of the Wandering Scholar (A Laetitia Rodd Mystery) 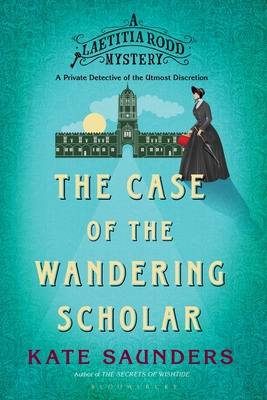 The Case of the Wandering Scholar (A Laetitia Rodd Mystery)

M. C. Beaton meets Miss Marple in the second book in the Laetitia Rodd Mysteries, which sees Kate Saunders's Victorian detective on the hunt for a missing Oxford academic.

In 1851, private detective Laetitia Rodd is enjoying a well-earned holiday when she gets an urgent request for her services. Mrs. Rodd's neighbor Jacob Welland is a reclusive, rich gentleman dying of consumption, and he wants Mrs. Rodd to find his brother, who has been missing for fifteen years.

Joshua Welland was a scholar at Oxford, brilliant, eccentric, and desperately poor when he disappeared from the university. Friends claim to have seen him since, in gypsy camps and wandering around the countryside. But the last sighting was ten years before-when Joshua claimed to be learning great secrets from the gypsies that would one day astound the whole world.

Mrs. Rodd travels to Oxford and begins to search for the wandering scholar. But as she investigates, Mrs. Rodd discovers something dark-and extremely dangerous-lurking in the beautiful English countryside.

For readers of James Runcie, Alexander McCall Smith, and M. C. Beaton, Laetitia Rodd and the Mystery of the Wandering Scholar is a delightful new mystery about Victorian England and an indomitable female detective.

KATE SAUNDERS is a journalist whose work has appeared in The Independent, The Guardian and The Washington Post. She is a founder of the Legal Research Group and was active in the campaign for Harry Wu's release.