Here Is Real Magic: A Magician's Search for Wonder in the Modern World 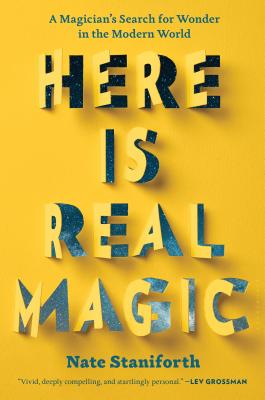 Here Is Real Magic: A Magician's Search for Wonder in the Modern World

An extraordinary memoir about finding wonder in everyday life, from magician Nate Staniforth.

Nate Staniforth has spent most of his life and all of his professional career trying to understand wonder--what it is, where to find it, and how to share it with others. He became a magician because he learned at a young age that magic tricks don't have to be frivolous. Magic doesn't have to be about sequins and smoke machines--rather, it can create a moment of genuine astonishment.

But after years on the road as a professional magician, crisscrossing the country and performing four or five nights a week, every week, Nate was disillusioned, burned out, and ready to quit. Instead, he went to India in search of magic. Here Is Real Magic follows Nate Staniforth's evolution from an obsessed young magician to a broken wanderer and back again. It tells the story of his rediscovery of astonishment--and the importance of wonder in everyday life--during his trip to the slums of India, where he infiltrated a three-thousand-year-old clan of street magicians. Here Is Real Magic is a call to all of us--to welcome awe back into our lives, to marvel in the everyday, and to seek magic all around us.

Nate Staniforth is a magician, performer, writer, traveler, and former host of the Discovery Channel's international hit TV show Breaking Magic. For over a decade, Nate has toured the U.S. as one of the busiest working magicians in the country and shared the philosophical underpinnings of his work through both a TEDx Talk and a lecture at the world-famous Oxford Union. He lives in Iowa City.