The Science of Harry Potter: The Spellbinding Science Behind the Magic, Gadgets, Potions, and More! 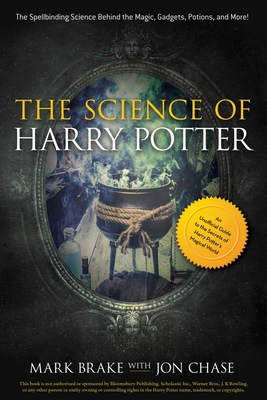 The Science of Harry Potter: The Spellbinding Science Behind the Magic, Gadgets, Potions, and More!

How does magic in J. K. Rowling’s universe work? Finally, the scientific secrets of the Harry Potter universe are revealed!

The insanely popular Harry Potter books and movies have brought the idea of magic and sorcery into mainstream. Modern muggle scientists have uncovered explanations to the seemingly impossible, including answers to such questions as:

Often perceived as a supernatural force, magic captivates and delights its audience because of its seeming ability to defy physics and logic. But did you ever wonder if science has any explanation for these fantastic feats?

The Science of Harry Potter examines the scientific principles behind some of the spells, scenes, and games that Harry, Hermione, Ron and Dumbledore love best. Author Mark Brake, whose The Science of Star Wars was a knockout success, has found the answers to satisfy the curious spirits of muggles everywhere. Here is a perfect Harry Potter gift for anyone obsessed enough to stand in line to see Harry Potter and the Cursed Child or Fantastic Beasts and Where to Find Them. Witches and wizards and even muggles everywhere will be fascinated by the merging of this improbable realm and real science!

Mark Brake developed the world’s first science and science fiction degree in 1999. He also launched the world’s first astrobiology degree in 2005. He’s communicated science through film, television, print, and radio on five continents, including for NASA, Seattle’s Science Fiction Museum, the BBC, the Royal Institution, and Sky Movies. He was one of the founding members of NASA’s Astrobiology Institute Science Communication Group. He has written more than a dozen books, including Alien Life Imagined for Cambridge University Press in 2012. Mark also tours Europe with Science of Doctor Who, Science of Star Wars, and Science of Superheroes road shows.

Jon Chase is a freelance science communicator with an honors degree in aerospace engineering, and a master’s degree in communicating science. After producing a science rap video for NASA about astrobiology in 2008, the Guardian identified him as “the next big thing” in education. Jon has worked with the BBC, the Open University, the Science Museum, the Royal Society, and the Royal Institution. He tours Europe with Science of Doctor Who, Science of Star Wars, and Science of Superheroes shows.