International Night: A Father and Daughter Cook Their Way Around the World *Including More than 250 Recipes* 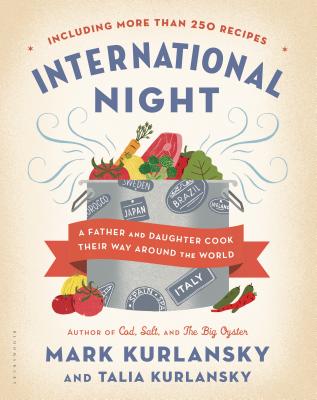 International Night: A Father and Daughter Cook Their Way Around the World *Including More than 250 Recipes*

From celebrated food writer Mark Kurlansky, a savory trip across the globe for parents and kids, with delicious and accessible recipes and tidbits both cultural and historical.

Once a week in the Kurlansky home, Mark spins a globe and wherever his daughter's finger lands becomes the theme of that Friday night's dinner. Their tradition of International Night has afforded Mark an opportunity to share with his daughter, Talia--and now the readers of International Night--the recipes, stories, and insights he's collected over more than thirty years of traveling the world writing about food, culture, and history, and his charming pen-and-ink drawings, which appear throughout the book.

International Night is brimming with recipes for fifty-two special meals--appetizers, a main course, side dishes, and dessert for each--one for every week of the year. Some are old favorites from Mark's repertoire, and others gleaned from research. Always, they are his own version, drawn from techniques he learned as a professional chef and from many years of talking to chefs, producers, and household cooks around the world. Despite these insights, every recipe is designed to be carried out--easily--by any amateur chef, and they are designed to be completed with the assistance of children.

Mark and Talia invite you and your family into their kitchen, outfitted with overflowing packets of exotic spices and aromas of delicacies from Tanzania and Kazakhstan to Cuba and Norway. From there, recipes and toothsome morsels of cultural and historical information will fill your bellies and your minds, and transport you to countries all around the world.

Mark Kurlansky is the New York Times bestselling author of Cod, Salt, The Basque History of the World, 1968, The Big Oyster, and The Eastern Stars, among many other books. He was awarded the 2011 National Parenting Publications Gold Award for World Without Fish, the 2007 Dayton Literary Peace Prize for Nonviolence, Bon Appetit's Food Writer of the Year in 2006, the 1999 James Beard Award for Food Writing and the 1999 Glenfiddich Award, both for Cod. The children's books, The Cod's Tale and The Story of Salt received the Orbis Pictus award from the National Council of Teachers of English and the ALA Notable Book Award, respectively. He lives in New York City. Visit his Web site at www.markkurlansky.com.

Talia Kurlansky, who often cooks and travels with her father, is in the eighth grade. This is her first book.