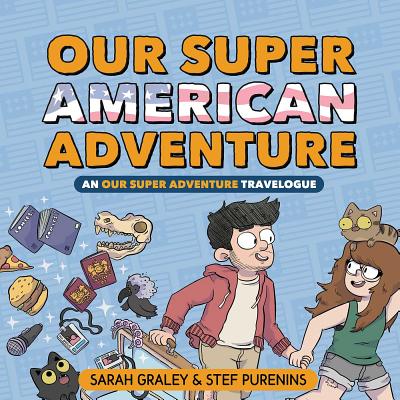 UK webcomic star Sarah Graley and her partner Stef chronicle all of their American adventures in Los Angeles, San Diego, and New York City in the latest installment in the Our Super Adventure series!

Traveling with your partner brings out the best (and maybe sometimes the worst) in your relationship! Whether it's using them as an airplane pillow, melting together in the sun at Disneyland, or bonding over beers cooled in the hotel sink, some of the best adventures are made while abroad! In this Our Super Adventure Travelogue book, Sarah and Stef leave England to find the sweaty magic of L.A, the secret celebrities of San Diego Comic-Con, and the soaring heights of NYC! Plus, bonus photos from their trip!

Sarah Graley is a comic writer and artist based in the UK. She’s been drawing Our Super Adventure and posting it online since 2012, and is also the author of the ever-spooky Kim Reaper, and the Rick and Morty: Lil’ Poopy Superstar miniseries.

Stef Purenins is a UK-based comic writer, letterer and color assistant. He co-writes and letters the popular webcomic Our Super Adventure with his partner Sarah Graley. When not running online stores and successful Kickstarter projects he color assists Sarah’s other comic projects and letters some of them too!