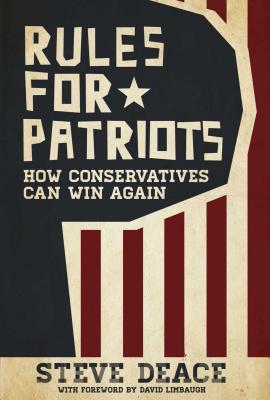 Time is running out on American exceptionalism. The light of liberty is flickering. At no point since we still had the Redcoats on our shores has freedom been more imperiled. This time it's not an invading foreign power that threatens us, but our own government gone wild-- unhinged from its Constitutional limits. Many great books have been written about what we should believe and why, or why the Left's beliefs are flawed, but never before has a book been written that shows how to do what we believe. Until now. The Left has its playbook, Saul Alinsky's infamous Rules for Radicals. Now the good guys have theirs. Endorsed by a who's who of the conservative movement, we present Rules for Patriots.

Steve Deace represents a new generation of conservatives more concerned with preserving liberty than blind partisanship that only props up a corrupt ruling class. To Deace and the millions of grassroots patriots he represents, it's not just Right vs. Left, but Right vs. Wrong. It's not just Republican vs. Democrat, but Us vs. Them. Called a conservative kingmaker for his influence in the first in the nation Iowa Caucuses from everyone from Fox News and Breitbart.com on the Right, to The Atlantic on the Left, his nationally-syndicated talk show is heard coast-to-coast each weeknight from 9pm to midnight Eastern. Deace is also a prolific writer who has contributed to USA Today, Politico, Business Insider, Townhall, and The Washington Times."