The World Eats Here: Amazing Food and the Inspiring People Who Make It at New York’s Queens Night Market 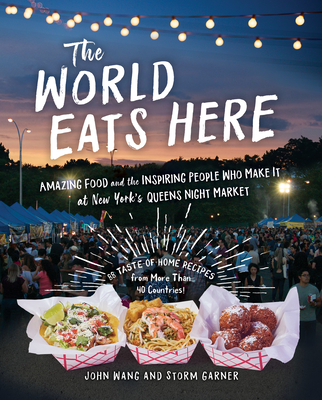 The World Eats Here: Amazing Food and the Inspiring People Who Make It at New York’s Queens Night Market

Prized recipes and tales of home, work, and family—from the immigrant vendor-chefs of NYC’s first and favorite night market

On summer Saturday nights in Queens, New York, mouthwatering scents from Moldova to Mexico fill the air. Children play, adults mingle . . . and, above all, everyone eats. Welcome to the Queens Night Market, where thousands of visitors have come to feast on amazing international food—from Filipino dinuguan to Haitian diri ak djon djon. The World Eats Here brings these incredible recipes from over 40 countries to your home kitchen—straight from the first- and second-generation immigrant cooks who know them best.

With every recipe comes a small piece of the American story: of culture shock and language barriers, of falling in love and following passions, and of family bonds tested then strengthened by cooking. You’ll meet Sangyal Phuntsok, who learned to make dumplings in a refugee school for Tibetan children; now, his Tibetan Beef Momos with Hot Sauce sell like hotcakes in New York City. And Liia Minnebaeva will blow you away with her Bashkir Farm Cheese Donuts—a treat from her childhood in Oktyabrsky in western Russia.

Though each story is unique, they all celebrate one thing: Food brings people together, and there’s no better proof of that than the Queens Night Market, where flavors from all over the world can be enjoyed in one unforgettable place.

John Wang was born and raised in Texas, but his love affair with night markets started during the childhood summers he spent visiting Taiwan. A graduate of Yale’s law and business school (and triple-major from the University of Michigan), John quit his high-paying M&A attorney job at a premier law firm after paying off his student loans and in 2015 pursued his dream of creating what came to be the Queens Night Market. Now in its 5th year, the popular event averages over 12,000 visitors every summer Saturday—and has welcomed over 1 million visitors since its inception. Along with his wife Storm Garner, he is co-author of the market’s cookbook The World Eats Here.

DC-born, Paris-raised, and based in New York City since working on her first La Mama, ETC theater production in 2006, Storm Garner is a multi-disciplined artist—writer, filmmaker, designer, actor, musician—with a BA in Nonfiction Creative Writing from Columbia University and current student in Columbia’s Oral History Master’s Program. She created the video for the Queens Night Market’s first Kickstarter campaign and the stories included in this book are derived from her long-form interviews with participating vendors for her thesis The Queens Night Market Vendor Stories Oral History Project, which will be publicly archived at the Louie B. Nunn Center for Oral History.