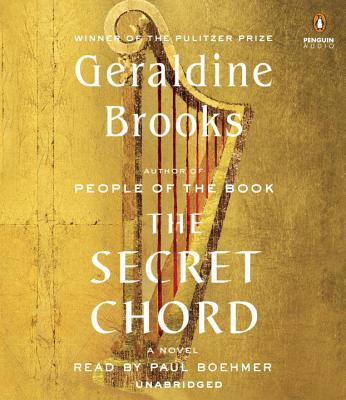 “A page turner. . .Brooks is a master at bringing the past alive. . .in her skillful hands the issues of the past echo our own deepest concerns:  love and loss, drama and tragedy, chaos and brutality.” – Alice Hoffman, The Washington Post

A rich and utterly absorbing novel about the life of King David, from the Pulitzer Prize–winning author of People of the Book and March.

With more than two million copies of her novels sold, New York Times bestselling author Geraldine Brooks has achieved both popular and critical acclaim. Now, Brooks takes on one of literature’s richest and most enigmatic figures: a man who shimmers between history and legend. Peeling away the myth to bring David to life in Second Iron Age Israel, Brooks traces the arc of his journey from obscurity to fame, from shepherd to soldier, from hero to traitor, from beloved king to murderous despot and into his remorseful and diminished dotage.

The Secret Chord provides new context for some of the best-known episodes of David’s life while also focusing on others, even more remarkable and emotionally intense, that have been neglected.  We see David through the eyes of those who love him or fear him—from the prophet Natan, voice of his conscience, to his wives Mikhal, Avigail, and Batsheva, and finally to Solomon, the late-born son who redeems his Lear-like old age. Brooks has an uncanny ability to hear and transform characters from history, and this beautifully written, unvarnished saga of faith, desire, family, ambition, betrayal, and power will enthrall her many fans.

Geraldine Brooks is the author of four novels, the Pulitzer Prize–winning March and the international bestsellers Caleb’s Crossing, People of the Book, and Year of Wonders. She has also written the acclaimed nonfiction works Nine Parts of Desire and Foreign Correspondence. Her most recent novel, Caleb’s Crossing, was the winner of the New England Book Award for Fiction and the Christianity Today Book Award, and was a finalist for the Langum Prize in American Historical Fiction. Born and raised in Australia, she lives on Martha’s Vineyard with her husband, the author Tony Horwitz.