Dining Out in Boston: A Culinary History 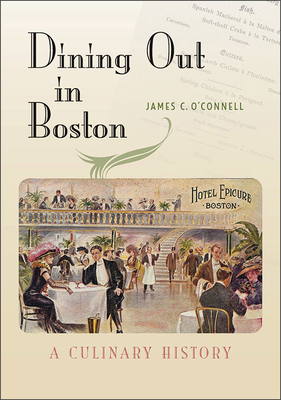 Dining Out in Boston: A Culinary History

Over the years, Boston has been one of America’s leading laboratories of urban culture, including restaurants, and Boston history provides valuable insights into American food ways. James C. O’Connell, in this fascinating look at more than two centuries of culinary trends in Boston restaurants, presents a rich and hitherto unexplored side to the city’s past. Dining Out in Boston shows that the city was a pioneer in elaborate hotel dining, oyster houses, French cuisine, student hangouts, ice cream parlors, the twentieth-century revival of traditional New England dishes, and contemporary locavore and trendy foodie culture. In these stories of the most-beloved Boston restaurants of yesterday and today—illustrated with an extensive collection of historic menus, postcards, and photos—O’Connell reveals a unique history sure to whet the intellectual and nostalgic appetite of Bostonians and restaurant-goers the world over.

JAMES C. O’CONNELL is an urban historian and urban planner and the author of numerous books, including Becoming Cape Cod and The Hub’s Metropolis.