An Argumentation of Historians: The Chronicles of St. Mary's Book Nine 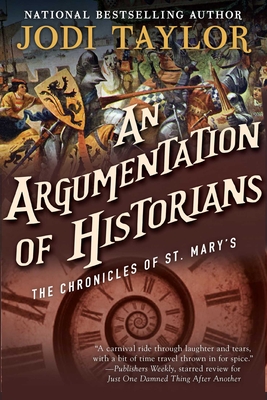 An Argumentation of Historians: The Chronicles of St. Mary's Book Nine

The ninth book in the bestselling British madcap time-travelling series, served with a dash of wit that seems to be everyone’s cup of tea. “Addicting…Fun and romantic.”—Bustle

From Tudor England to the burning city of Persepolis, from a medieval St. Mary’s under siege to Victorian Rushford and a very nasty case of gaol fever, Max is struggling to keep her private life intact. There’s an ambitious programme hindered by giant teapots, plus Mrs. Midgely’s objection to dead hamsters in her airing cupboard, and Mr. Markham’s stubborn refusal to reveal his exact marital status.

And as if that’s not enough—the unfortunately not leprosy-laden Malcolm Halcombe is back. Admittedly, none of this is the most secure platform from which to launch an initiative to bring down the renegade Clive Ronan, but hey—what’s the worst that could happen?

Jodi Taylor is, and always has been, a history nut. Her Chronicles of St. Mary’s, a wild mix of history, adventure, comedy, romance, tragedy, and anything else the author could think of, began as a self-published book entitled Just One Damned Thing After Another. It’s now a bestselling, wildly addictive series.