All Good Things: From Paris to Tahiti: Life and Longing 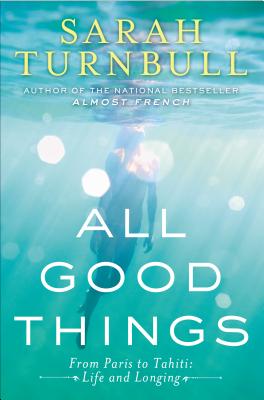 All Good Things: From Paris to Tahiti: Life and Longing

In this lushly written follow-up to "Almost French," Sarah Turnbull explores a new paradise: Tahiti.
Having shared her story in her bestselling memoir, "Almost French," Australian writer Sarah Turnbull seemed to have had more than her fair share of dreams come true. While Sarah went on to carve out an idyllic life in Paris with her husband, Frederic, there was still one dream she was beginning to fear might be impossible starting a family. Then out of the blue an opportunity to embark on another adventure offered a new beginning and new hope. Leaving behind life in the world's most romantic and beautiful city was never going to be easy. But it helps when your destination is another paradise on earth: Tahiti.

Sarah Turnbull is the author of the international bestseller "Almost French." Formerly a television journalist with SBS in Sydney, she began working as a freelance writer following her move to Paris in 1994. After nearly a decade in France, Sarah spent several years on an island near Tahiti. She now lives in Sydney with her husband, Frederic.