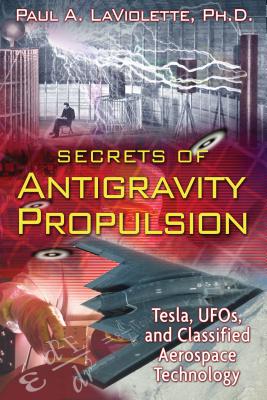 In Secrets of Antigravity Propulsion, physicist Paul LaViolette reveals the secret history of antigravity experimentation--from Nikola Tesla and T. Townsend Brown to the B-2 Advanced Technology Bomber. He discloses the existence of advanced gravity-control technologies, under secret military development for decades, that could revolutionize air travel and energy production. Included among the secret projects he reveals is the research of Project Skyvault to develop an aerospace propulsion system using intense beams of microwave energy similar to that used by the strange crafts seen flying over Area 51.

Using subquantum kinetics--the science behind antigravity technology--LaViolette reviews numerous field-propulsion devices and technologies that have thrust-to-power ratios thousands of times greater than that of a jet engine and whose effects are not explained by conventional physics and relativity theory. He then presents controversial evidence about the NASA cover-up in adopting these advanced technologies. He also details ongoing Russian research to duplicate John Searl’s self-propelled levitating disc and shows how the results of the Podkletnov gravity beam experiment could be harnessed to produce an interstellar spacecraft.

Paul A. LaViolette, Ph.D., is president of the Starburst Foundation, an interdisciplinary research institute, and holds advanced degrees in systems science and physics. The author of Genesis of the Cosmos, Earth Under Fire, Decoding the Message of the Pulsars, Secrets of Antigravity Propulsion, and Subquantum Kinetics, he lives in New York.

More by Paul A. LaViolette, Ph.D.