The Sound of Paper: Starting from Scratch (Artist's Way) 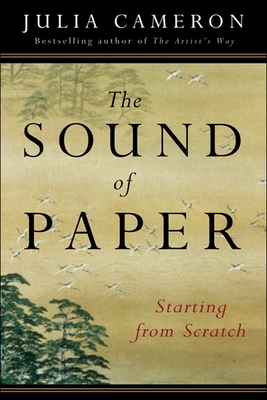 The Sound of Paper: Starting from Scratch (Artist's Way)

The bestselling author of The Artist's Way draws on her many years of personal experience as both a writer and a teacher to uncover the difficult soul work that artists must do to find inspiration.

In The Sound of Paper, Julia Cameron delves deep into the heart of the personal struggles that all artists experience. What can we do when we face our keyboard or canvas with nothing but a cold emptiness? How can we begin to carve out our creation when our vision and drive are clouded by life's uncertainties? In other words, how can we begin the difficult work of being an artist? In this inspiring book, Cameron describes a process of constant renewal, of starting from the beginning.  She writes, "When we are building a life from scratch, we must dig a little. We must be like that hen scratching beneath the soil. 'What goodness is hidden here, just below the surface?' we must ask."

With personal essays accompanied by exercises designed to develop the power to infuse one's art with a deeply informed knowledge of the soul, this book is an essential artist's companion from one of the foremost authorities on the creative process. Cameron's most illuminating book to date, The Sound of Paper provides readers with a spiritual path for creating the best work of their lives.

Julia Cameron has been an active artist for more than three decades. She is the author of more than thirty books, including such bestselling works on the creative process as The Artist’s Way, Walking in This World, and Finding Water. Also a novelist, playwright, songwriter, and poet, she has multiple credits in theater, film, and television, including an episode of Miami Vice, which featured Miles Davis, and Elvis and the Beauty Queen, which starred Don Johnson. She was a writer on such movies as Taxi Driver, New York, New York, and The Last Waltz. She wrote, produced, and directed the award-winning independent feature film God's Will, which premiered at the Chicago International Film Festival, and was selected by the London Film Festival, the Munich International Film Festival, and the Women in Film Festival, among others. In addition to making films, Cameron has taught film at such diverse places as Chicago Filmmakers, Northwestern University, and Columbia College. She is also an award-winning playwright, whose work has appeared on such well-known stages as the McCarter Theater at Princeton University and the Denver Center for the Performing Arts.