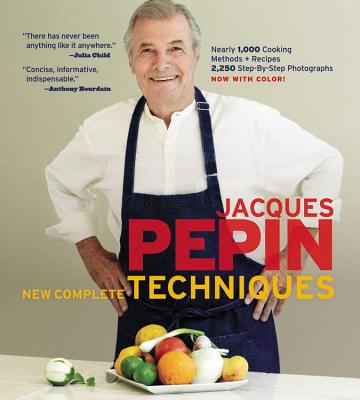 Jacques PÃ©n is universally hailed by professional chefs and home cooks as the grand master of cooking skills and methods. Now, his classic seminal work, Jacques PÃ©n's Complete Techniques, is completely revised and updated with more than 1,000 color photographs and 30% new techniques.

A culinary masterclass taught by the master himself, Jacques PÃ©n'sNew Complete Techniques includes more than 600 cooking techniques and methods along with 160 recipes. Each recipe and technique is explained using step-by-step instructions accompanied by photographs featuring PÃ©n himself.

Follow along as this culinary legend demonstrates every aspect of classic cooking, from start to finish. Whether you're a home cook interested in learning basic skills, or a seasoned professional looking for pro-tips, Jacques PÃ©n'sNew Complete Techniques has something for everyone.An example of the range of topics covered includes:

The time-tested recipes in this volume teach everyone, from the greenest home cook to the most wizened professional, how to put techniques into practice. This completely revised edition includes thousands of color and black-and-white photographs and is redesigned to make it even easier to follow the step-by-step techniques.

Jacques PÃ©n has published twenty-six cookbooks and hosted twelve public television cooking series. One of the best-known culinary teachers in the world, he's earned a place in the James Beard Foundation's Cookbook Hall of Fame, captured the foundation's Who's Who of Food and Beverage in America award, been recognized for Best TV Cooking Segment and Best Culinary Video, and earned the foundation's Lifetime Achievement Award in 2005.

Chef Jacques won a daytime Emmy award for a television show he co-hosted with Julia Child and is among an elite group that has received the Chevalier de L'Ordre des Arts et des Lettres and Chevalier de L'Ordre du Agricole, two of the highest honors bestowed by the French government. The founder of the American Institute of Wine and Food, he shares his knowledge through teaching at The French Culinary Institute. He lives with his wife in Madison, CT.