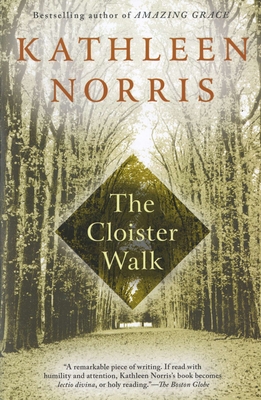 By  Kathleen Norris
Paperback
$ 16.00
Out of Stock In Store (Click to Order)

“Vivid, compelling... An embrace of moral and spiritual contemplation.” –The New York Times

“A remarkable piece of writing. If read with humility and attention, Kathleen Norris's book becomes lectio divina, or holy reading.” –The Boston Globe

From the iconic author of Amazing Grace: A Vocabulary of Faith, a spiritual journey that brings joy to the meanings of love, grace and faith.

Why would a married woman with a thoroughly Protestant background and often more doubt than faith be drawn to the ancient practice of monasticism, to a community of celibate men whose days are centered on a rigid schedule of prayer, work, and scripture? This is the question that poet Kathleen Norris asks us as, somewhat to her own surprise, she found herself on two extended residencies at St. John's Abbey in Minnesota.

Part record of her time among the Benedictines, part meditation on various aspects of monastic life, The Cloister Walk demonstrates, from the rare perspective of someone who is both an insider and outsider, how immersion in the cloistered world-- its liturgy, its ritual, its sense of community-- can impart meaning to everyday events and deepen our secular lives. In this stirring and lyrical work, the monastery, often considered archaic or otherworldly, becomes immediate, accessible, and relevant to us, no matter what our faith may be.

Kathleen Norris is the award-winning, bestselling author of Amazing Grace: A Vocabulary of Faith; The Cloister Walk; and Dakota: A Spiritual Geography. Her poems have appeared in The New Yorker, in various anthologies, and in her own three volumes of poetry. She divides her time between South Dakota and Hawaii.